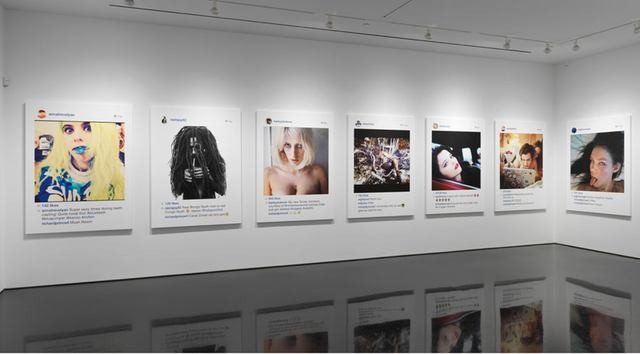 Right now you can purchase someone’s Instagram photo for around $100,000. The money won’t go to the photographer, however, it will go to Richard Prince, who has blown up and made prints of other people’s Instagram photos for his series titled “New Portraits.” The previously private show at the Gagosian has been a part of Frieze.

According to Petapixel, “Prince is notorious in the art world for taking other people’s work, ‘appropriating’ them as his own with various changes, and then selling them for large amounts of dough.” And no, he did not get permission for these prints, which are screenshots of the images with one addition from Prince, “a short message [he] posted as the last comment on each one.”

Artnet addressed the exhibit in a piece titled “Richard Prince Sucks,” where they write: “In another image, he writes under young singer-songwriter Sky Ferreira’s portrait of herself in the passenger seat of a red sports car: ‘Enjoyed the ride today. Let’s do it again. Richard.’ If she had a snide response to the leering comment, we never learn what it was. Like a true troll, Prince always gives himself the last word.”

One Instagram in the show was taken by DoeDeere, who posted an image from the show earlier this week, adding:

Figured I might as well post this since everyone is texting me. Yes, my portrait is currently displayed at the Frieze Gallery in NYC. Yes, it’s just a screenshot (not a painting). No, I did not give my permission and yes, the controversial artist Richard Prince put it up anyway. It’s already sold ($90K I’ve been told) during the VIP preview. No, I’m not gonna go after him. And nope, I have no idea who ended up with it! #lifeisstrange #modernart #wannabuyaninstagrampicture

DIY Photography notes that Prince has been “rephotographing” since the 1970s, and if anyone does go after him, it won’t be his first time in court. In the past, however, he’s won, since his work (including these Instagrams) falls under fair use.

And while you’re poking around Instagram, why not check out @artFido and @artFidoVideo? We’ve now got well over half a million followers, and we always give credit to all the artists we feature and promote!