A picture has emerged claiming to show elusive street artist Banksy finishing off his most recent artwork in Bethlehem. Dressed in a distinctive fedora hat, the middle-aged man in the photo was wearing grey cargo shorts and a grey fleece and was clutching a stencil and an aerosol can. The image shows him glancing over his shoulder in a courtyard close to the Chapel of the Milk Grotto, a holy site in the ancient town. The stencilled artwork says ‘Peace on Earth *Terms and Conditions Apply’, and appears on the homepage of Banksy’s website. 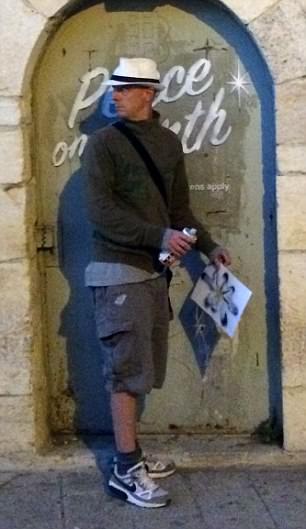 It comes after Banksy opened a new project, The Walled Off Hotel, said to have ‘the worst view in the world’, in Bethlehem on November 2 to mark the centenary of the Balfour Declaration, which created the State of Israel. Tourist Jason Stellios, 24, from Barkingside, Essex,snapped the photo but did not realise its significance until a week later.  Mr Stellios said: ‘Last week I was coming out of the Milk Grotto Church through the courtyard and I saw a guy spray painting a star on a door opposite using a stencil. ‘I just thought it was another one of those street artists that come over to paint the wall so I took a photo of him. ‘He walked off and was down the road once I had left the courtyard.

‘Then I spotted the same guy wearing a white hat with a black stripe on it tucked away at the back of the AlterNativity play outside the Walled Off Hotel on Sunday evening (December 3). ‘I was chatting with people after the play and they said that they wanted to go see the new Banksy piece which I didn’t know about and I went in a cab with them up to the church. ‘I then realised I saw this being spray painted a few days earlier.’ 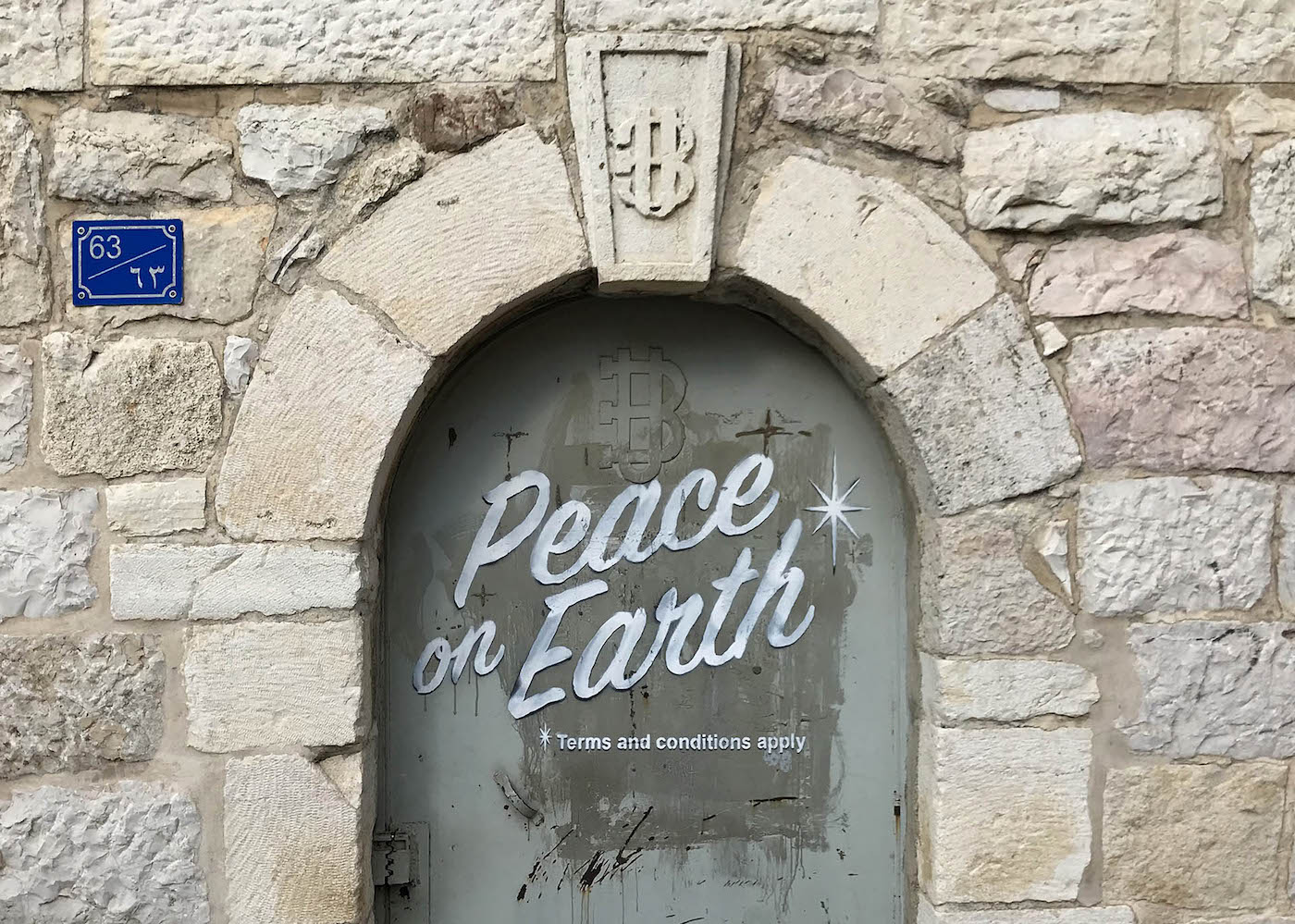 When Mr Stellios went on Banksy’s website, he said he realised that he had captured the artist in action. On the homepage was a photograph of the ‘Peace on Earth’ stencil he had seen being painted. ‘The stencil is opposite the Milk Grotto Chapel and I noticed a ‘B’ motif on the door, and above it,’ he said. ‘I assumed it was someone’s private door, as it was opposite the entrance to the church. ‘People drew it to my attention when I showed them a photo.’

The street artist, from Bristol, has repeatedly returned to the West Bank to paint on the illegally-built wall, using the publicity to draw attention to the suffering of Palestinians living behind it. Mr Stellios said: ‘I’m not really keen on street art but I’m quite excited to have seen him in action. Banksy’s helping people here by what he’s doing but I’m not a fan or anything.’ 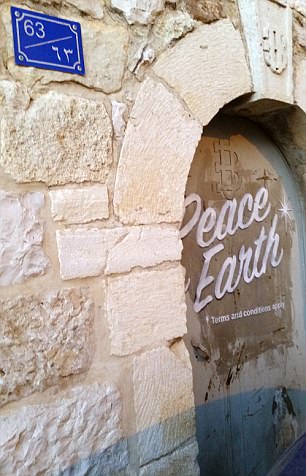 The ‘Peace on Earth’ stencil, and another Banksy painting, of two cherubs trying to break through the wall, were unveiled on December 3 before an influx of tourists arrive to celebrate Christmas. There are clues as to the identity of the man in the picture – and certainly has links to the Banksy phenomenon. The middle-aged man in the photo appears to be graffiti artist James Ame, known as Ame72, who has exhibited work alongside Banksy – which some people believe is a collective of artists, rather than an individual working alone.

He was also snapped months earlier, in Herzliya Marina, Israel, where an exhibition put on by Banksy’s former agent went on display. Mr Ame, who started his career in 1985, is British but has spent ten years working as an artist in Israel. His website shows a number of striking tags on the 700km concrete wall, dating from earlier this year – mostly painted in Bethlehem. Also for sale on Ame72’s website are prints showing a Lego figure – a motif in his work – tagging the words ‘I’m Banksy!’.

On his Instagram account he is shown holding a spray can and wearing a fedora hat while painting the wall, wearing the same clothes as he was on the day Mr Stellios took the photo. And his biography says he has exhibited artworks alongside Banksy. Mr Ame has been working at The Walled Off Hotel according to photographs from his Instagram account. On his website, fans can take part in a competition to ‘WIN this Authentic Banksy Box Set from the Walled Off Hotel in Bethlehem.’ Mr Stellios said he took the photo because he thought it was unusual to see someone painting so close to a holy site. He said: ‘I thought it was odd as it’s someone’s private door, it’s not the wall which is always being painted on.  ‘I think it’s either a door that belongs to a friend, or church property. I thought it was unusual.’ The TEFL teacher has spent a month travelling in the region and visiting friends on either side of the wall.

In April, a woman claimed to have captured footage of a similar-looking artist, wearing the same kind of hat, as he worked at an exhibition in Israel. The world’s most famous street artist had only recently opened an interactive exhibition at a hotel in Bethlehem. But a witness claimed she filmed him days before at an art show at a shopping mall curated by his former manager in nearby Israel. The Israeli exhibition, The Art of Banksy, opened in the Arena mall in Herzliya Marina, not far from Tel Aviv. 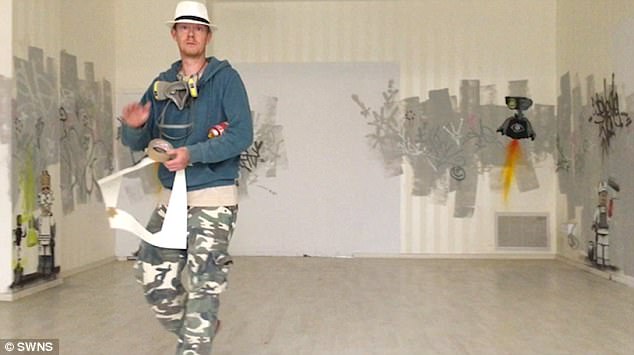 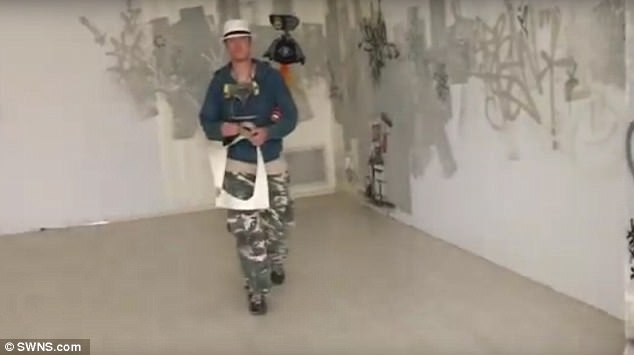 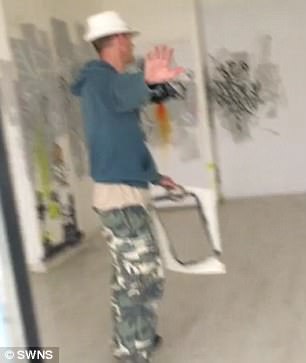 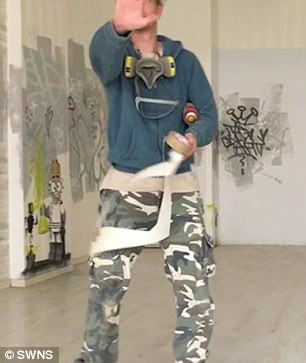 In June, there were claims that the world’s greatest art mystery may have finally been solved after the identity of Banksy was apparently revealed by accident in a slip of the tongue – by drum and bass DJ Goldie. The pioneering musician was being interviewed for a podcast when he referred to the elusive artist as ‘Robert’. It was thought to be confirmation that Banksy was in fact Robert Del Naja – a member of the band Massive Attack. Del Naja – known as 3D – is a friend of Goldie and they were both graffiti artists in the same circles in the late 1980s. Last year, a researcher claimed Del Naja is Banksy which he denied – but listeners say Goldie’s gaffe appears to confirm his identity. 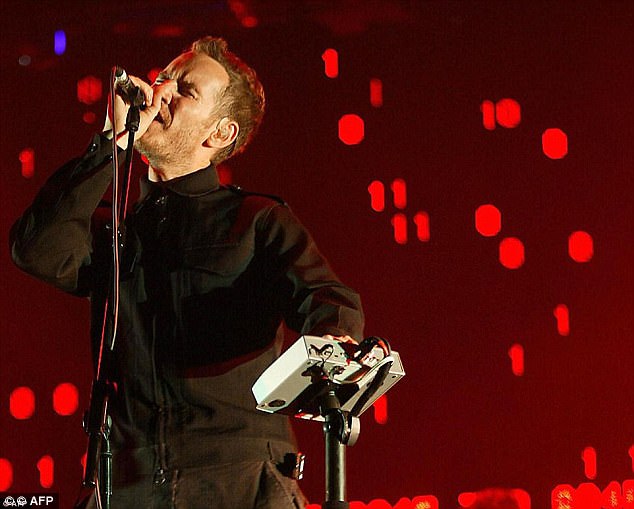 In 2016, journalist Craig Williams carried out a five-month investigation into Banksy and concluded that Del Naja, 52, was behind the movement. He claimed Banksy is not just one person but a team of street artists – and that Del Naja is the ringleader. It came after he discovered that on at least six occasions, Banksy’s work popped up shortly before or after Massive Attack gigs in the same city. Last year Del Naja denied the rumours and said: ‘It would be a good story but sadly not true. ‘Wishful thinking I think. He is a mate as well, he’s been to some of the gigs. It’s purely a matter of logistics and coincidence, nothing more than that.’ Banksy rose to fame for his provocative stencil work in the late 1990s and ever since, the mystery surrounding his identity has deepened. At a similar time, Massive Attack were releasing Mezzanine and Del Naja was being credited as the first graffiti artist in Bristol. 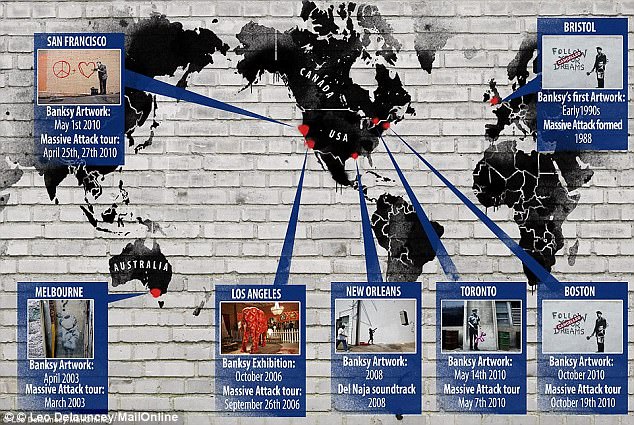 According to Mr Williams’s investigation, six Banksy murals were reported in San Francisco on May 1, 2010 after his band performed a two-night stint in the city that April. Massive Attack played Toronto a week later before more new Banksy murals were reported there. Later on that tour, Massive Attack headed to Boston’s Chinatown a day after a Banksy appeared there. Similar patterns are reported in 2006 when Massive Attack embarked on a US tour a week before Banksy’s Barely Legal exhibition in the city. In 2008, Bristol street artist – or group – Banksy produced 14 stencils across New Orleans marking the third anniversary of Hurricane Katrina. Del Naja co-wrote the soundtrack to the New Orleans-themed documentary Trouble the Water during the same time frame. Also in April 2003, Banksy’s work appears in Melbourne, the same city Massive Attack had played the month before. Del Naja also appeared in Banksy’s Exit Through The Gift Shop speaking about the pair’s friendship from his early days in the city. And Banksy even provides the foreword to Del Naja’s book 3D and the Art of Massive Attack, which was released last year. 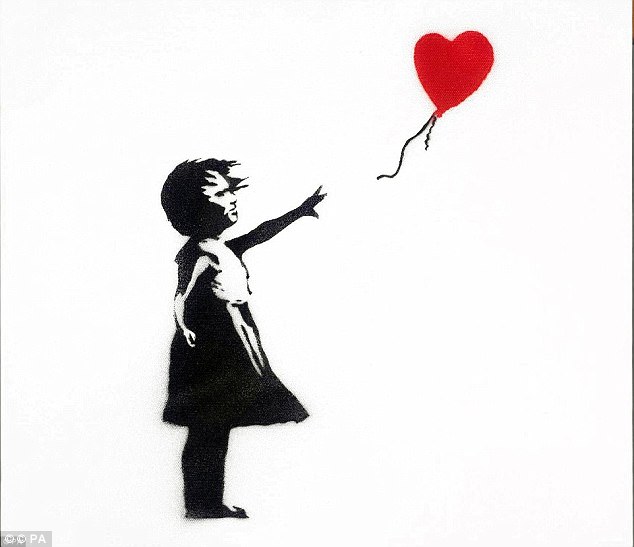