It’s nearly the kind of fake stunt that Banksy himself would be proud of. Need free publicity and exposure for a show with slow ticket sales? Why not stage a fake theft of a Banksy painting, produce the staged robbery on video, and trust the media to run the story despite the dodgy cover-up? This is the story of the current Steve Lazarides unofficial Banksy show in Toronto.

But let’s back-track for a moment.

Lazarides[1] is Banksy’s former art dealer but the two parted ways in 2008 in what appeared to be unfriendly circumstances before Banksy became internationally known and regarded.[2] Banksy has continuously refused to endorse Lazarides on any of his projects, and has gone out of his way to publicly disassociate himself from the Lazarides brand; for example, during a Lazarides’ run Banksy exhibition in Melbourne in 2016, Banksy updated his website to read “Banksy is NOT… represented by Steve Lazarides or any other commercial gallery.”[3]

On the contrary, Lazarides has continued to ride on the coat tales of the Banksy phenomenon at every opportunity. It is obvious why, as Lazarides has struggled to find success where he has curated and/or produced events without the banner artist. Locating any positive press about Steve Lazarides on a non-Banksy show is an impossibility.  Several artists have informed us (on the basis that we respect their anonymity and don’t publish their names), that they are owed thousands upon thousands of dollars by Lazarides from previously failed shows.

Can you spot a fake?

Back to the current Banksy show. Amid flailing ticket sales for the $35-million Art of Banksy exhibit in Toronto’s west end, it was originally reported by CNN partner CBC on 13 June 2018 that “Toronto police are investigating a report that a Banksy artwork was stolen from a Toronto exhibit curated by one of the artist’s former agents.”

According to reports, “a surveillance video shows a man with half of his face covered, cautiously entering an art exhibit in Toronto and then darting away clutching a Banksy print. The theft of the Banksy print called “Trolley Hunters” was reported Sunday to police. On Thursday, Toronto Police released the surveillance video. At 5:04 a.m. Sunday, a man was seen on the surveillance video walking through a door into a space where the exhibition was being held. Wearing glasses, a black jacket and a camouflage baseball hat, he carefully stepped into the empty room. Seconds later, he’s seen rushing out with the artwork in his hands.”[4]

The show’s publicist said the surveillance video is real and not a publicity stunt, reported the CBC. It was reported that the ‘stolen’ work was worth upwards of $45,000USD, however there are works from the same edition for sale for much, much less on eBay.

Here is the video. We’ll let you be the judge as to whether or not it is real or a ‘stunt’ – editor’s note: we have added the ‘this is clearly a fake stunt’ music over the top :)

Here is an image of ‘Trolley Hunters’: 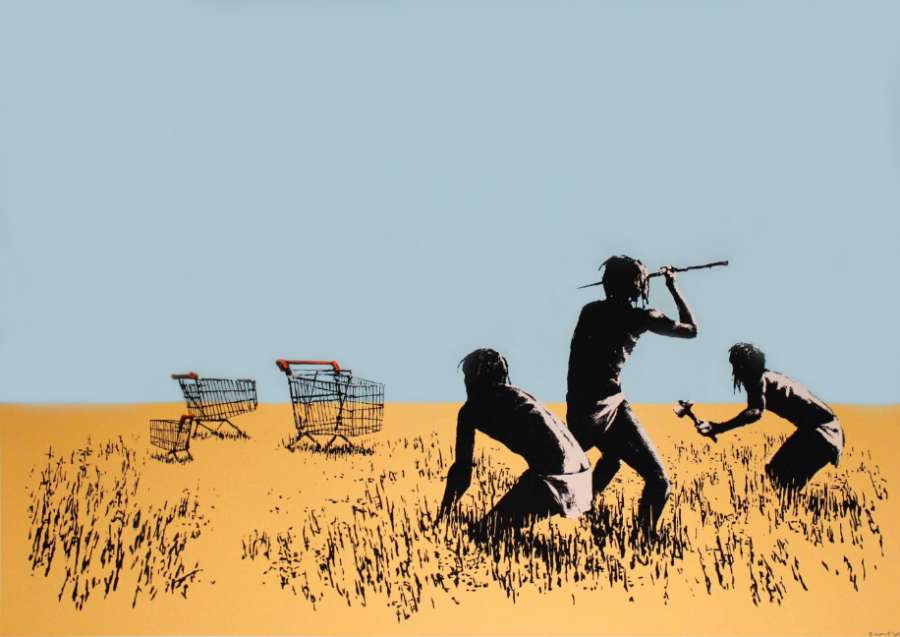 There are lots of clues that this is a fake video, even to the untrained eye. For example, why did the thief steal one of the least expensive, most unliked of all of the Banksy works hanging on the wall? There were dozens of other smaller, original works hanging next to the ‘stolen’ work that were worth many times more. As you have probably worked out by now, as many other commentators have, this was one big hoax: 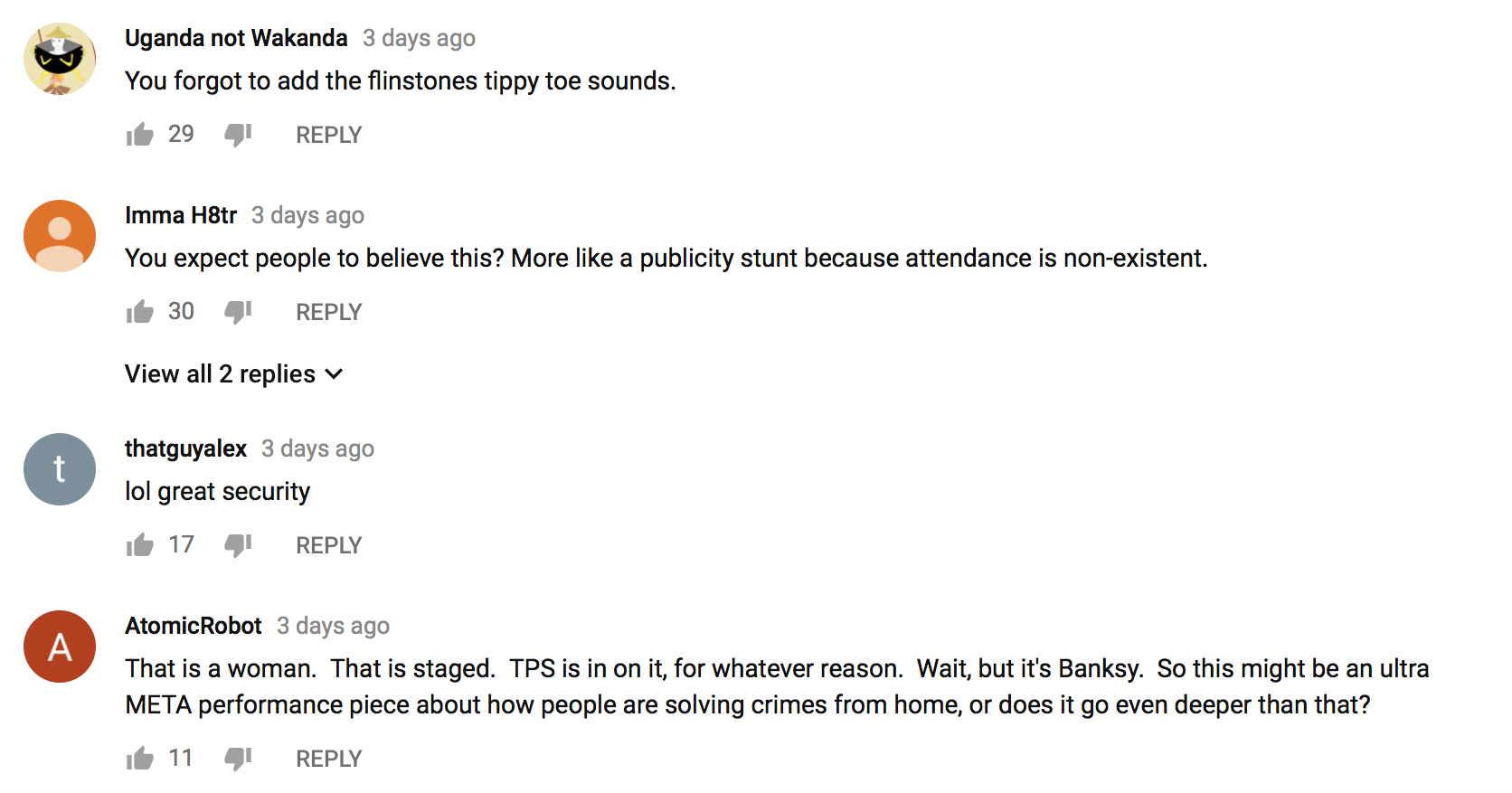 Despite the obviousness of this fake stunt, the media absolutely ate it up. In the era of checkbook and clickbait journalism, all the major outlets covered it, including the NY Times, The Guardian, BBC, ABC News, etc, etc.

Fortunately we know our readers are a little bit smarter than this :)

So what do you think? Was the Banksy work actually stolen or was it a rather simple stunt which the media decided to report on to get views and clicks?