by artFido 9 years ago3 years ago 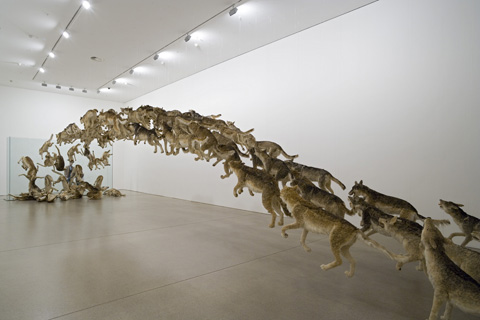 Cai Guo-Qiang takes an interesting look at pack mentality with his amazing installation piece, “Head On”. Striking in its size and energy, “Head On” consists of ninety-nine life-like wolves constructed from metal wires, painted sheepskins and hay, running as a pack through the length of an empty white room, only to crash headfirst into a glass wall, to then fall stunned and lifeless to the ground.

At the entryway to the white room, six stray wolves casually  join more wolves heading in the same direction. Along the length of the wall, the wolves quickly gain momentum and rise in a tight pack into an arc of simulated movement. The wolves are packed closely together, creating the illusion of one long, moving “stream” of wolves.

The “stream”, is suspended above the heads of the viewers, moving towards, and finally crashing forcefully, into a Plexiglas wall at the opposite end of the room. The glass panel is only slightly wider than the width of the “stream” of wolves which is approximately four to five wolves wide.

Their realistic faces are made of plastic, and they each possess marbles for their dark, lifelike eyes. The expressions on the faces of the wolves, as well as the tension in their bodies, contribute to the illusion that the wolves are running towards something with deliberation; with their ears laid back, mouths open with their teeth bared and tongues hanging out.

The compacted, clean arc of wolves with their bodies elongated and stretching to reach the approaching glass panel is juxtaposed with the disorderly wolf bodies that smash into the wall and lay beneath on the floor, limbs and heads twisted some broken in unnatural positions, beginning to pile on atop of one another. The conflict created by the aerial, streamlined running wolves and the broken, crumpled, “lifeless” bodies at the base of the glass panel, is striking and abrupt.

If you enjoyed this post, you’ll likely enjoy many of our previous posts on art installations around the world!