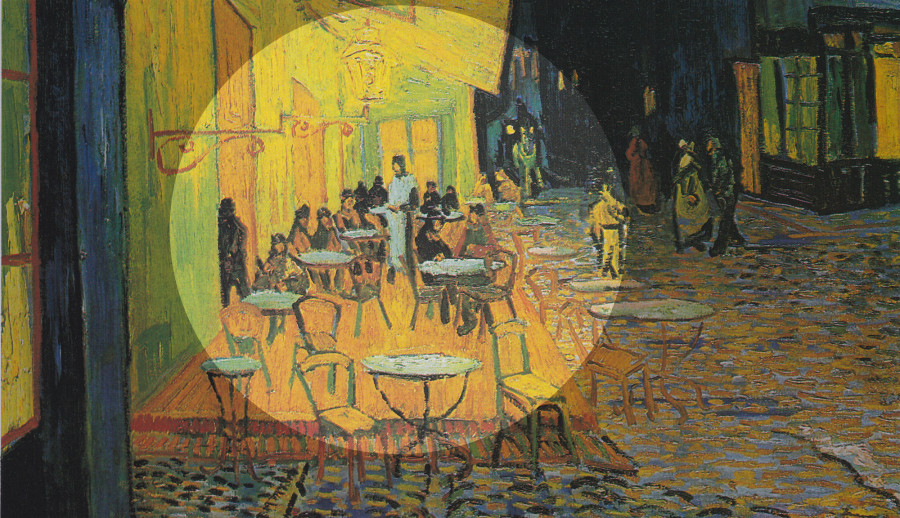 Vincent Van Gogh, most known for “Starry Night” and losing his left ear, may have left one final secret up his sleeve. His iconic painting “Cafe Terrace at Night” depicts a group of anonymous patrons enjoying an evening in Arles, France. Yet new research suggests that the individuals lurking in the group of 12 — with a central, long-haired figure, another departing in the shadows and golden lookers-on — may not be so nameless after all. Yes, it’s possible that one of van Gogh’s most famous artworks contains an allusion to an even more famous painting: Leonardo da Vinci’s “The Last Supper.”

A religious allusion wouldn’t be too out of character for Van Gogh. Before devoting his attention to painting, the famous Dutch artist had wished to “preach the gospel everywhere,” and his father, Theodorus van Gogh, was a pastor for a Dutch Reformed church. Vincent’s uncle was a renowned Dutch theologian and biblical scholar who helped his nephew in his endeavors to become a preacher, a pursuit at which he would fail multiple times.

Finally, at the age of 27 or 28, van Gogh began creating art in earnest, quickening the pace to complete nearly 900 works in the decade before his death in 1890. Of the hundreds of works, most people would likely recognize just a few. “Starry Night” certainly, but perhaps also the probable first attempt at a star-filled sky, “Cafe Terrace at Night.” But how much do we really know about the glorious depiction of evening diners?

Independent researcher Jared Baxter holds a few theories on van Gogh’s use of religious symbolism. In fact, he has embarked upon an academic lecture circuit in defense of them, most recently at the 2015 Dutch Association of Aesthetics. The evidence Baxter draws from, though speculative, is compelling enough to warrant consultation and letters of recommendation from numerous scholars and authors with a background in the study of van Gogh, such as William Kloss, a Smithsonian Journeys expert.

Baxter essentially believes that van Gogh subtly inserted da Vinci’s “Last Supper” — or at least the “genre” of Last Supper paintings, which often had different compositions of diners and Judas departing — into “Cafe Terrace at Night.” What follows here is the crux of Baxter’s argument, as explained to The Huffington Post, so be prepared to get sucked down a Dan Brown-esque rabbit hole.

Around the time of working on “Cafe Terrace at Night,” van Gogh wrote to his brother, Theo van Gogh, explaining that he had a “tremendous need for, shall I say the word — for religion,” with direct reference to the painting. In his first sketch of the work (above right), van Gogh essentially outlined a cafe terrace at night, but the finished work (above left) has some alterations.

In the final work, a shadowy figure can be seen leaving through the doorway. Still others, golden-hued, watch the group of a dozen from the corner. Van Gogh’s trademark yellow lends itself to the heavenly appearance of the scene, and the lantern above the central figure serves as a halo. The awning is drawn back across the terrace to reveal a cross in the distance.

Multiple crosses appear in the painting, a subtle symbolism experienced before by van Gogh.

Van Gogh’s friend and fellow artist, Émile Bernard, shared “A Woman Washing Herself” with van Gogh, a painting that uses a window to give the perception that the subject is bearing a cross. To his brother, van Gogh described it as “Rembrandtesque,” alluding to the painter’s notorious use of religious symbolism.

For “Cafe Terrace at Night,” van Gogh included a similar cross above the central subject, as a singular horizontal muntin holds the panes of glass, unlike the window just across the street. Reaching a bit more, considerable zooming is required to see another cross emblazoned upon the central figure’s chest.

Of course, these religious symbols could be unintentional. Yet, the Japanese art historian Tsukasa Kodera released multiple books in the 1990s about van Gogh’s use of mythology and Christianity, arguing that in paintings such as “The Sower” — also from 1888 — van Gogh would “turn that sun into a halo,” as Baxter had noted.

UCLA professor Debora Silverman wrote in Van Gogh and Gauguin: The Search for Sacred Art that “van Gogh’s art had evolved by 1888 into a symbolist project that can be called ‘sacred realism,’ a project of divinity made concrete and discovering the infinite in weighted tangibility.”

Van Gogh’s “La Berceuse,” of a woman sitting in a chair, could also be interpreted as a Madonna, considering the painting’s original placement between two of the artist’s famous sunflower depictions. In a letter to his brother, van Gogh explained the collective works as “a sort of triptych.” Author of multiple books on van Gogh, Evert van Uitert has further written, in Simiolus: Netherlands Quarterly for the History of Art, that “the image created is that of an altarpiece in which Madame Roulin takes on the role of the Virgin Mary as Stella Maris and… the sunflowers can be associated with Christ.”

So, there may be precedent for religious symbolism finding its way into van Gogh’s work over time.

Van Gogh tackled “Interior of the Restaurant Carrel in Arles” several times. The first is believed to have been completed in 1888, though the exact date is unknown. Baxter argues that it depicts another sort of “Last Supper” scene, pointing out the central figure, the diners’ placement on one side of the table and the prominence of wine.

In the second stab at the work, van Gogh added bread and more wine to the foreground as well as someone holding what appears to be a palm frond over the diners. Additionally, Baxter believes the figure to the immediate left of the center, wearing blue, to be a depiction of John the Apostle’s famous lean from da Vinci’s work.

The key might come from the religious symbolism of fellow Dutch painter Rembrandt. 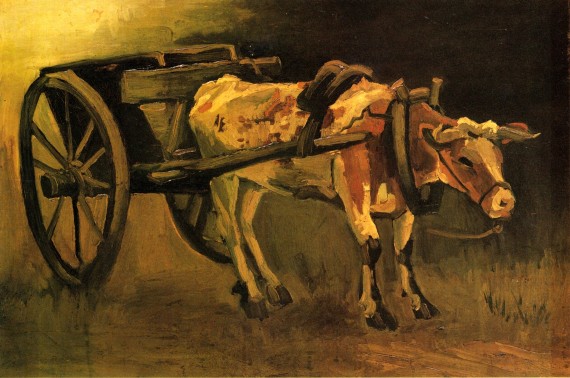 Van Gogh was heavily influenced by symbolic painters before him, notably the Dutch artist Rembrandt van Rijn. Van Gogh would spend many hours staring at Rembrandt’s work, eventually attempting copies. His extensive correspondence speaks to this deep appreciation. In a letter from 1888, the year he painted “Cafe Terrace at Night,” van Gogh wrote to Émile Bernard, romantically claiming that the poet Charles Baudelaire’s poem about Rembrandt had failed to accurately capture the artist.

In Letter 649, van Gogh wrote that Baudelaire “knew more or less nothing about Rembrandt” because he hadn’t truly looked closely at the symbolism. Van Gogh makes a direct reference to Rembrandt’s “Slaughtered Ox,” housed at the Louvre, which he seems to believe had religious significance. (St. Luke’s symbol was the ox and he’s considered the patron saint of butchers, doctors, students and, you guessed it, artists.) Further interpretations, such as Boston College professor Kenneth Craig’s, have suggested that the ox is a depiction of Christ’s crucifixion. Van Gogh admonished Bernard for similarly failing to look closely enough and would go on to paint multiple depictions of an ox himself.

In the end, van Gogh’s letters imply that the artist did desire to revive subtle religious symbolism. And so, perhaps, a deeper inspection of “Cafe Terrace at Night” might reveal his intentions.

Did van Gogh give a serious nod to da Vinci’s greatest masterpiece in one of his own?

Jared Baxter was first inspired to start going down this rabbit hole when he realized there were still huge discoveries being made about van Gogh’s life, such as the Van Gogh Museum’s announcement that a self-portrait painted by van Gogh was most likely a depiction of his brother. Around the same time, it was lengthily (and convincingly) argued, that van Gogh hadn’t killed himself but had been murdered by a local bully. It was similarly argued that van Gogh hadn’t cut off his own ear (his roommate, Paul Gauguin, had cut it off). Van Gogh may be one of humanity’s most famous artists, and yet our knowledge of his life is as blurry as his “Starry Night.”

“You know when you’re interpreting art, you’ve got to leave open the possibility that you’re not correct … there can never be 100 percent certain,” Baxter told The Huffington post. “I think there’s enough information and enough evidence to at least make a pretty good case.”

“I think if you put 12 art historians in a room,” he continued, “you’d get 13 definitions of what symbolist art is.”

Baxter said he hopes the mystery is a bit like Dan Brown’s The Da Vinci Code— an enthralling idea any art aficionado could appreciate — that one of the world’s masterpieces has been hidden within another.

Further fueling a Brown-esque conspiracy, one of van Gogh’s letters is missing and, from Baxter’s research, it is referred to in subsequent letters. The independent researcher believes that the missing piece is where van Gogh “really laid out his plan for what symbolist art means.” The missing piece to the puzzle. “Both Gauguin and Bernard, in wanting to take credit for the movement, perhaps destroyed the letter,” surmised Baxter. “It’s kind of my theory on that.”