by artFido 10 years ago8 years ago 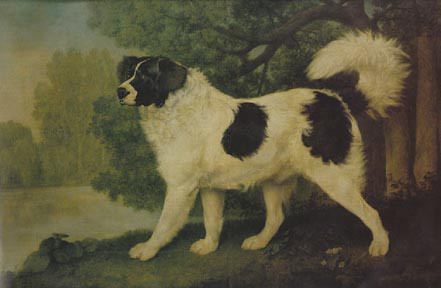 At the Westminster Dog Show’s annual “dogs only” art auction (now held in New York), two price records were broken this year. William Henry Trood‘s Dejeuner (a painting that shows dogs and cats eating from a large dish) set a record, selling for $194,500. A record that was later bested by another of Trood’s paintings, Hounds in a Kennel (no need for an explanation) which sold for $212,500.

Alan Fausel, vice-president and director of fine art at Bonhams, the auction house responsible for the Westminster show, was thrilled with the results of this year’s show. “The dog art market is certainly turning a corner.” he said.

Most of the dog art sold at the annual auctions are 19th century pieces,but a number of contemporary artists have begun to make a name for themselves. Robert K. Abbett, 86, who lives in Scottsdale, Arizona, .

William Secord has a particular interest in dog art and has dedicated his Manhattan Gallery entirely to the subject. He has written six dog art books and collected more than 2,500 works. He is also the founding director of the only art museum in the U.S. dedicated to dogs, the American Kennel Club’s Museum of the Dog.

Secord, considered one of the world’s foremost authorities on 19th century dog art is pleased with the renewed interest in dog art. “We have had an increase in visitors over past years, but also a substantial increase in sales compared to this time last year.”

Most of the dog portraits sold at the annual auctions are 19th century pieces, Fausel said, but a number of contemporary artists have made names for themselves, such as Robert K. Abbett, 86, who lives in Scottsdale, Ariz. Abbett, who started as an illustrator, painted hundreds of dogs through the years and has had work sell for as much as $50,000.

Abbett was a true believer in meeting his subjects first, although in later years he acknowledged “Photography was a godsend to an artist who could capture a scene and take it home and work on it at leisure.”

Those not involved in the traditional world of art, let alone dog art, would likely be very familiar with American painter Cassius Marcellus Coolidge’s (1884-1934) whimsical, cartoonlike images of dogs playing poker. But whilst Coolidge’s works have fetched upwards of $600,000 at auction, Secord doesn’t consider them part of the dog art market. Apparently, they are not realistic enough.

The bulk of the auction pieces are 19th century and feature purebred hunting dogs like setters, pointers and retrievers, Fausel said.

The highest price ever paid for a dog painting was for a 6-by-7-foot portrait of a Newfoundland painted by George Stubbs (1724-1806), which fetched an astonishing $3.6 million in 1999.

Interestingly, cats just don’t have the same appeal. Bonhams used to include cats in its auctions, but apparently a lack of cat paintings (and low prices) got them the boot.

We wonder what Mr Secord would make of our Fido? Not exactly realistic, and he doesn’t play cards, but we think he’s pretty swell all the same.