by artFido 10 years ago5 years ago

Alternatively, just take the Banksy. Either way, I think someone’s been taking some creative licence with the disappearing Banksy that has just reappeared on an auctioneer’s rostrum in Miami.

Fascinated as I am about the transformation of street art to commodity, I’ve written about Banksy and his compadres a number of times before… here, and here. So my attention was piqued when I heard about the chunk of wall removed in London’s Turnpike Lane and transported to Fine Art Auctions Miami (FAAM). Of course, the otherwise unremarkable concrete render was embellished with a 2012 Banksy, an artwork that now has a title: Slave Labor (Bunting Boy). Given the non-Anglicised spelling of ‘Labor’ (vs. ‘Labour’), I suspect the title was conjured up by the American auction house rather than bestowed upon the work of art by its British creator. It also has a lot number and an eye-wateringly high estimate – $500,000-700,000 – for its appearance at FAAM (link to catalogue entry… here). 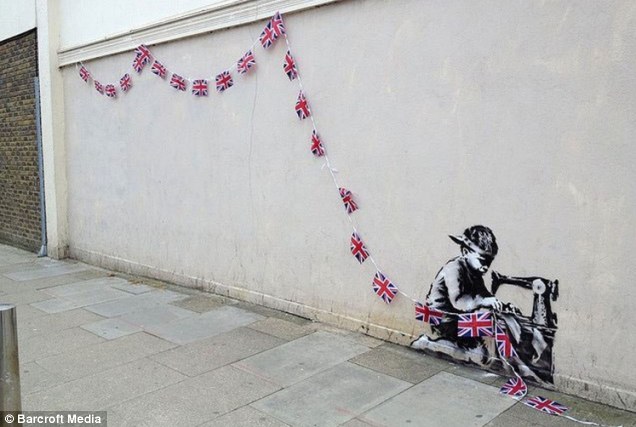 But that’s not the end of the story. 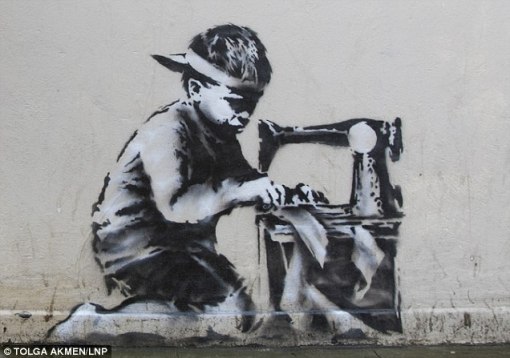 I notice that when it was installed, the stencil incorporated actual Union Jack bunting (see the 1st image in this post). But according to an article in the Mail Online, soon after the it appeared, someone nicked the bunting. And so it remained. Until very recently. Compare the photos. The one immediately above shows the stencil in situ in London after the bunting went AWOL. Note: no bunting. And the image below, from the FAAM catalogue? Oh, look! Bunting. Who was responsible for that? It seems highly unlikely that Banksy had anything to do with the ‘restoration’ of the work. If he was not consulted, which given his famous reluctance to even authenticate his works, seems unlikely to me, surely this represents fairly blatant disregard for his moral rights. Not that he would care too much, I wouldn’t imagine. But, really. Naughty, naughty. Whoever you are. Unless, of course, the auction house used a file image to illustrate the catalogue, which would also be very misleading. And it also means someone will need to whack in a string of bunting prior to the sale anyway to match the catalogue illustration. 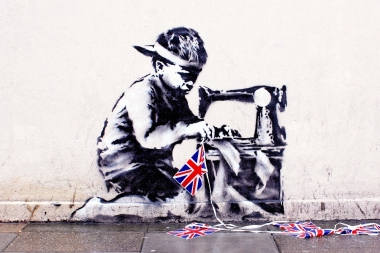 Hey now, hey now, my bunting’s back! (Image via http://www.faamiami.com)

The stencil appeared in London in May 2012. General consensus was that it was a comment on the use of child labour (I remain a stickler for British spelling) in the production of memorabilia for QEII’s Diamond Jubilee. The choice of location was significant. The shop Banksy chose to grace with one of his stencils, Poundland, was at the centre of a scandal in recent years when it was revealed that children as young as seven worked in the Indian factory that produced some of the things being flogged in the store.

It probably shouldn’t come as any surprise, then, that someone has decided it would be best transformed into cold, hard folding stuff, rather than enriching the community. The wall now… 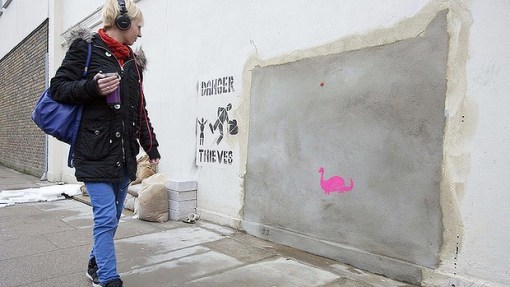 Gone to the bank(sy). (image: Reuters, via theage.com.au)