Aboriginal art has played a huge roll in raising awareness of Aboriginal culture, myth, and community within Australia and throughout the world. It has also been instrumental in addressing some of the inequalities Aboriginals suffered at the hands of colonial Australians. The first Aboriginal Australian citizen, Albert Namatjira, gained his citizenship as a direct result of the international acclaim he received for his work.

Unfortunately, with artists such as Namatjira and later Clifford Possum Tjapaltjarri of the the Papunya movement (the dot painting movement) raising the profile of, and interest in, Aboriginal art came an increase in exploitation, forgery and unethical practices. By the end of the 20th century, the industry was reeling, and legitimate aboriginal artists and artist communities suffering, as a result of the overwhelming number of forgeries, fakes and reproductions entering the market. Finally, in August 2006, the Australian Senate initiated an inquiry into issues in the sector. Over 10 months, the inquiry heard from key players in the sector including the Northern Territory Art Minister, Marion Scrymgour, who was very vocal in her condemnation of how Aboriginal art was being produced and marketed internationally.

The inquiry’s final report, handed down on 21 June 2007, made 29 recommendations, including:

Beyond forgeries and fakes, another issue that has made artist attribution and acknowledgement difficult throughout the industry is the popularity of Aboriginal artist cooperatives, communities and companies. Whereas many western artists pursue formal training and work as individuals, much of the contemporary Indigenous art reaching the market now is created in community groups and art centres. Many of the centres operate online galleries where local and international visitors can purchase works directly from the communities without the need of going through an intermediary. This in itself, has an effect on the value of Aboriginal art already in the market and creates difficulties when attempting to address the provenance of works.

In a monumental step in addressing some of the issues identified in the 2007 inquiry and the difficulties in tracing provenance and value, the Art Consulting Association of Australia has just released its recommended standard practice on how to catalogue Aboriginal art.

In October 2011 the ACAA executive appointed the association President, Adrian Newstead, former head of Lawson~Menzies Aboriginal Art Department, to Chair an expert panel of consultants and approved valuers to address the issue. Following the preparation of an initial draft, an expert panel comprising Brenda Collahan, Jane Raffan, Sophie Ullin and Susan McCulloch was convened. The committee included government approved valuers and industry experts with an intimate background working with Aboriginal art and artists. Members consulted widely amongst dealers, academics, and the families of several key artists. They took particular account of Aboriginal cultural conventions, and considered the most appropriate way in which to accommodate these in the art market.

At its recent AGM, held during the Melbourne Art Fair, the ACAA membership approved the final document, which it believes should become the standard for use by all auction houses, dealers and valuers. The document is consistent with that currently used for non-Indigenous Australian and International artists.

We at artFido are proud to adopt the practices set down by the ACAA and are hopeful that others within the industry will swiftly do the same.

The preferred exemplar used in the final document is Clifford Possum Tjapaltjarri. (That used most commonly amongst general Australian art circles is Russell Drysdale). While other artists were considered, the committee agreed that Clifford Possum’s oeuvre contains more works that are likely to be in the categories specified than any other Aboriginal artist, and for this reason the use of his name assists in clarifying the meaning and intent of the classification system.

The Recommended Cataloguing Practice and Terms for Australian Indigenous paintings sculpture and works on paper is as follows:

(The name Clifford Possum Tjapaltjarri is used as an exemplar. This classification system is equally relevant for works relating to Emily Kame Kgnwarreye, Rover Joolama Thomas, and all other Australian Indigenous artists)

The artist’s full name including skin group should be used. This may be catalogued as either Clifford Tjapaltjarri Possum, or Clifford Possum Tjapaltjarri enabling artists to be indexed according to their common name or skin name depending on preference.
Terms used have the meanings ascribed to them below. Please note that all statements as to authorship are subject to provisions of the Conditions of Sale at all times.

Every reasonable effort has been made to determine the correct authorship, details and provenance of this artwork. Neither the Art Consulting Association of Australia [ACAA] or its individual members warrant that their opinion is necessarily correct. Nor do they, or the seller, accept liability in relation to any legal claims arising directly or indirectly from the auction or sale of the relevant artwork. The buyer must rely on their own inquiries, and buys the relevant artwork at their own risk.

In our qualified opinion a work produced entirely in the artist’s own hand, or with minor culturally appropriate assistance, under the authority (authorship) of the artist.

In our qualified opinion a work which, though lacking in definitive ‘safe’ provenance, is believed to be in whole or substantial part the work of the artist.

In our qualified opinion a work, which the artist worked on, with the family completing the majority if not all of the decorative infill.

In our qualified opinion a work rendered under the supervision and authority of the artist, during which the artist played a leading role in its composition and realization.

In our qualified opinion a work of the period of the artist, rendered by culturally appropriate family or clan members, that is closely related to his style, but not painted by the artist. This may or may not bear a signature believed to be that of the artist and/or be accompanied by photos or videos of the artist with the finished work.

The work has a signature either on the front or verso, which in our qualified opinion is the signature of the artist.

The work has a signature, which in our qualified opinion might possibly be the signature of the artist although there is an element of doubt.

The work is so dated and in our qualified opinion was executed about the date.

The work is so dated and in our qualified opinion may possibly have been executed about that date although there is an element of doubt. 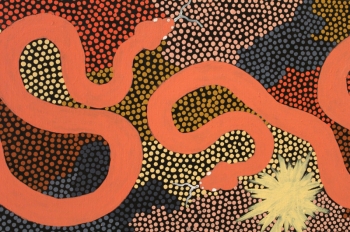