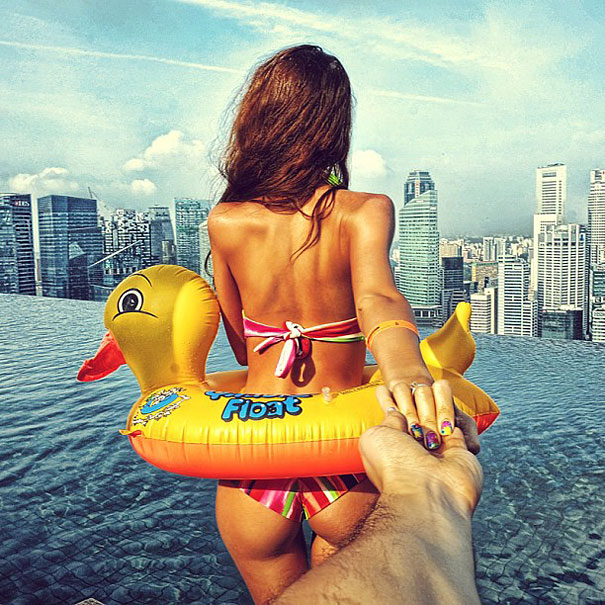 We recently blogged about Russian photographer Murad Osmann and his “Follow Me To” photo series (read HERE) where Murad takes the viewer on an intimate journey together with his girlfriend Natalia Zakharova who leads him around the world. Instead of run-of-the-mill tourist shots, Murad snapped pictures of his girlfriend taking his hand and leading him through some of the world’s most iconic and recognisable landmarks. There are more down-to-earth pictures too, like those of Natalia walking up an escalator, or at a bowling alley.

The series is aptly titled, “Follow Me” on Murad’s Instagram account, which has since gone viral with nearly 350,000 followers at the time of this post. The first photo happened accidentally in Barcelona when Natalia and Murad were on vacation. “Nataly was a bit annoyed that I was always taking pictures of everything, so she grabbed my hand and tried to pull me forward,” he explained to The Daily Mail UK. “That said it didn’t stop me from doing photos while she was pulling me. So that’s how it all started.”

Murad graduated as a civil engineer from Imperial College London, but later decided to pursue a career in photography and started his own production company Hype Production in 2011. The Daily Mail UK reports that his girlfriend Natalia works as a Russian journalist, and they have been together for a year and a half.

Here are the latest images in their journey! And here they are….