Lionel Bucket has one of the most stunning views in the world from the stone outcrop that makes up the veranda of his clifftop cave home. He has an outlook over the Blue Mountain range in Australia from the cave home that was built on 600 acres of bush land that has been in his family dating back to the 1950s. 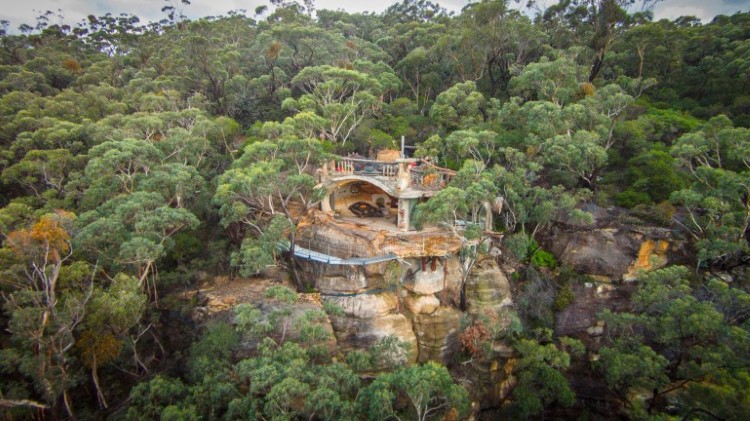 Bucket inherited the land and chose not to log but instead to use the land for his creativity by creating eco-friendly cabins for people to stay in on vacation. The cabins not only show off his imagination when it comes to design but also his tradesmanship. Bucket built his first home at 17, starting out young as a carpenter. He has put his carpentry skills to the test with the cabins at the site however one of his most remarkable creations, the clifftop cave, hardly uses any wood at all. 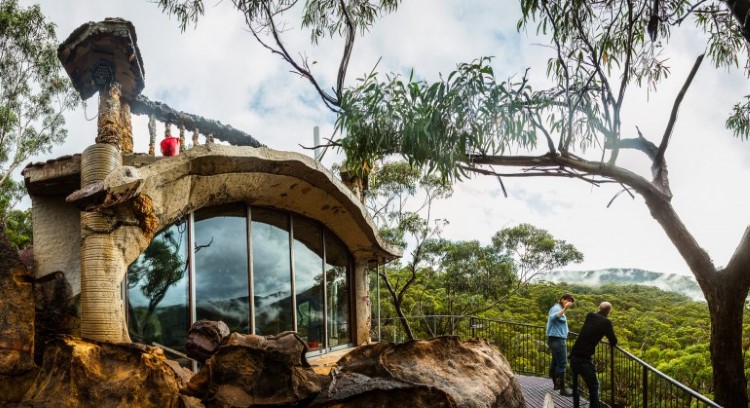 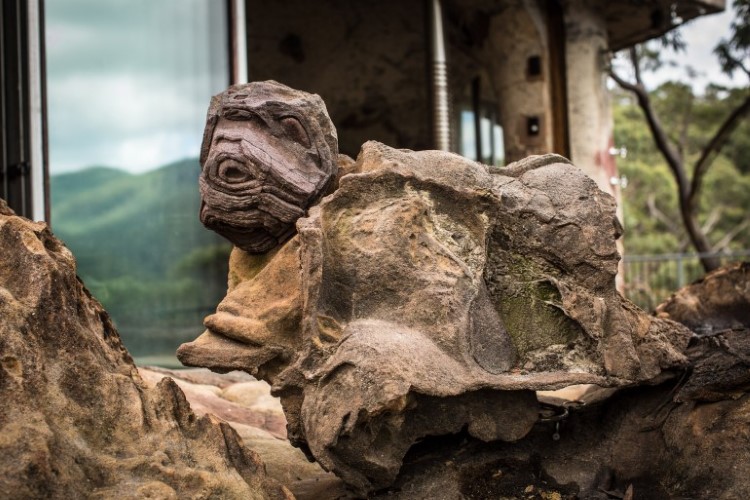 The clifftop cave is a steel and concrete construction built around a natural rock platform. Entry to the cave home is through a small round wooden door that would look at home in Middle Earth’s Shire.

You step through the round doorway into a landing with a sandstone kitchen. 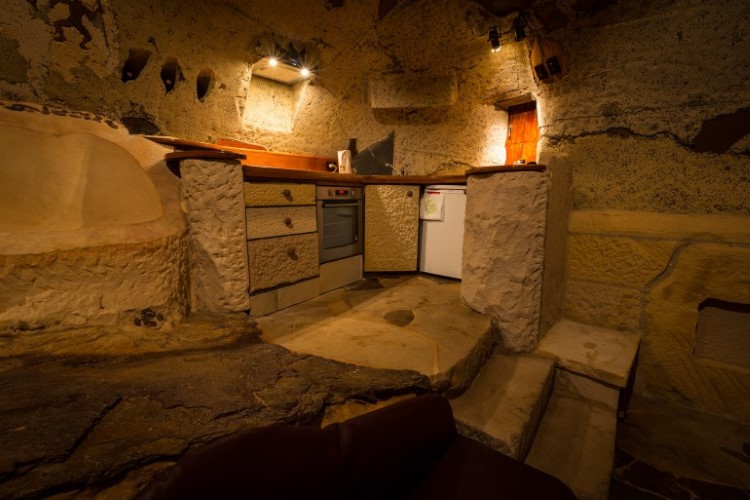 From here you head down a few steps which take you into the main living region. There is a space heater for burning wood, a bed with kangaroo skins and behind a sliding door made of stone there is a hidden TV.

Bucket put a copper pipe winding around the exhaust flue of the heater and this captures all the waste heat which is reused to heat water up as it goes to a tank on the roof of the cave home. 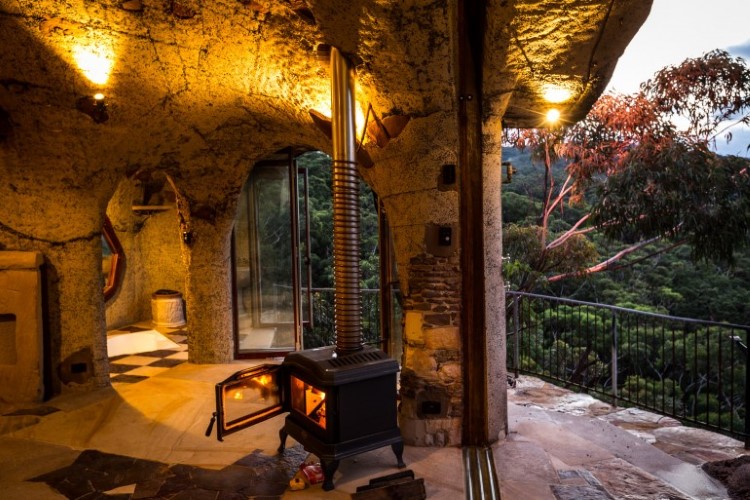 There are double glazed glass doors that can be rolled out to open up the cave and bring the exterior in, or in the case of bad weather they can be closed. 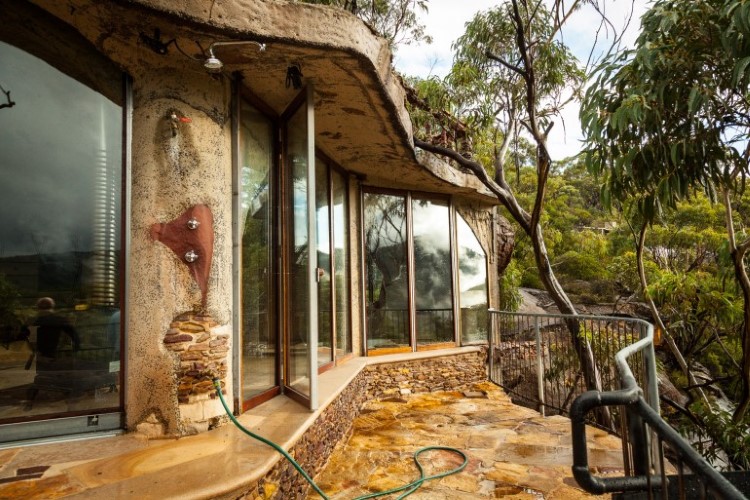 The bathroom comes with a stone basin that has been hand carved and an ironstone toilet seat which has been placed over a long drop composting “dunny”. The cave home features an outdoor shower and provides stunning views out over the valley. 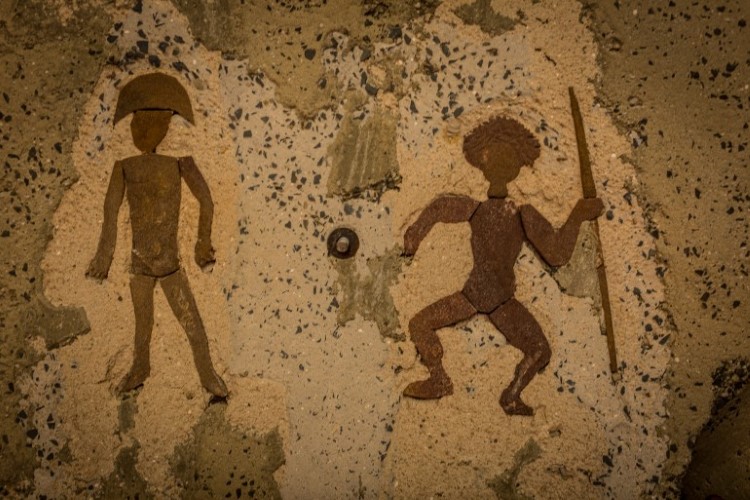 There are plenty of carvings on the interior of the cave home and these tell the story of the history of settlement in Australia. Bucket said that he walks around the land looking for spots where it would be good to build and he found the spot for the clifftop cave around 5 years ago. 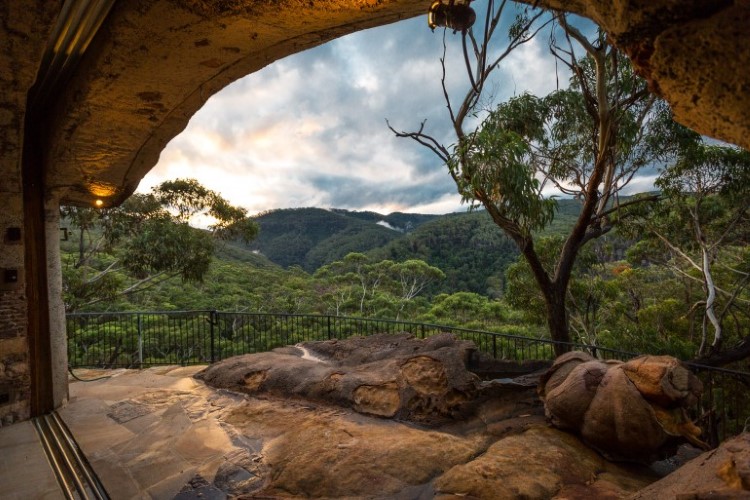 While there is no doubt the home is beautiful, it is the bush around it that takes centre stage. From the veranda you can see the clouds come rolling in to cover the mountains, stunning sunsets and sunrises and at night as the sky is so clear you can see the colours of the Milky Way. 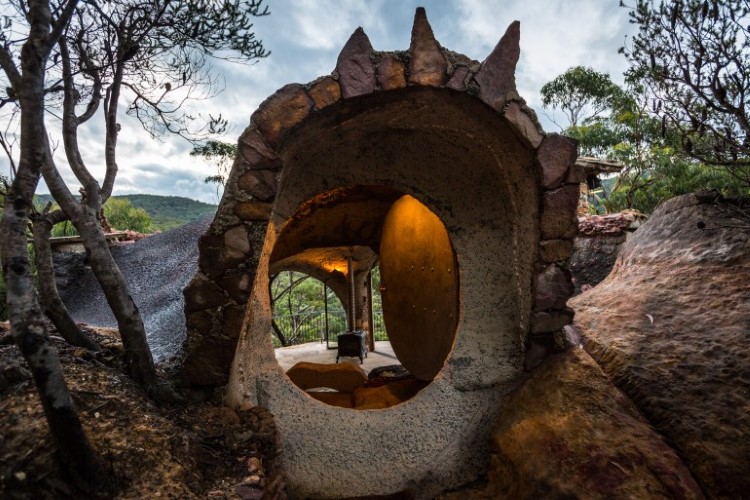 The clifftop cave home is going to be hired out to guests through the Blue Mountains Cabins website, however for the time being Bucket admits that he is attached to it himself. 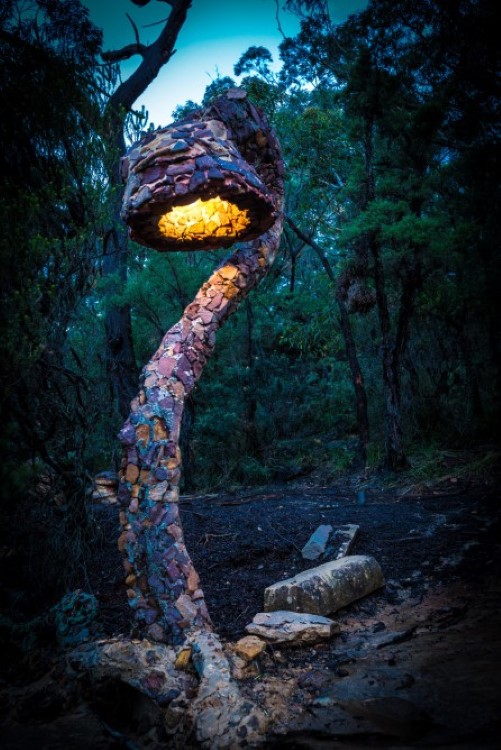 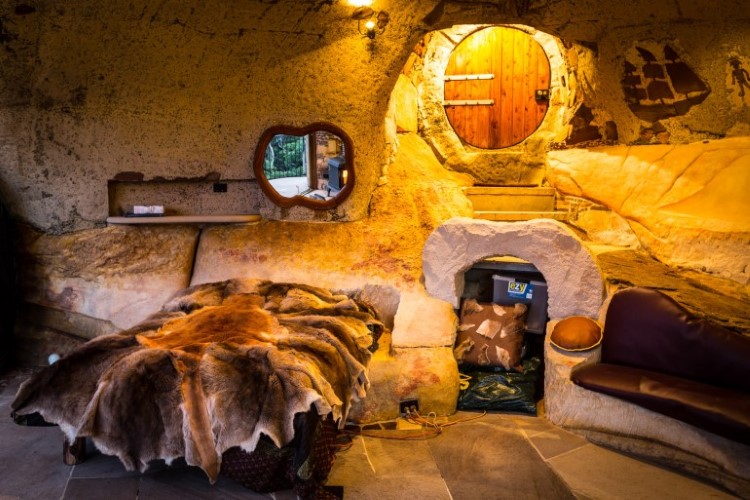 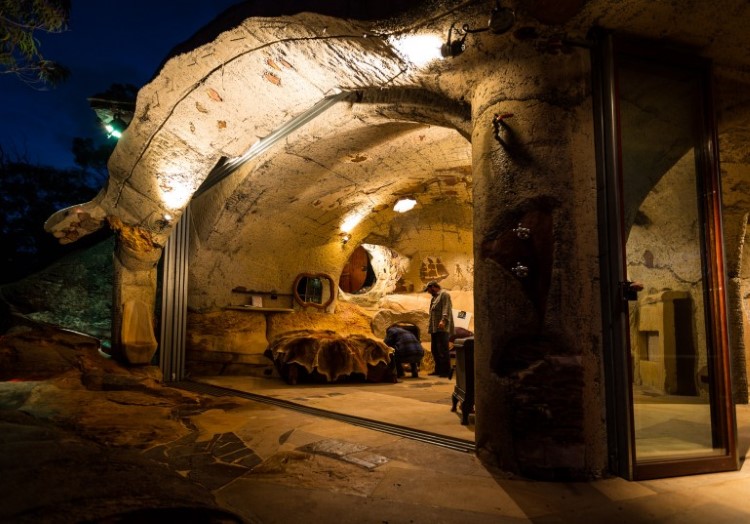 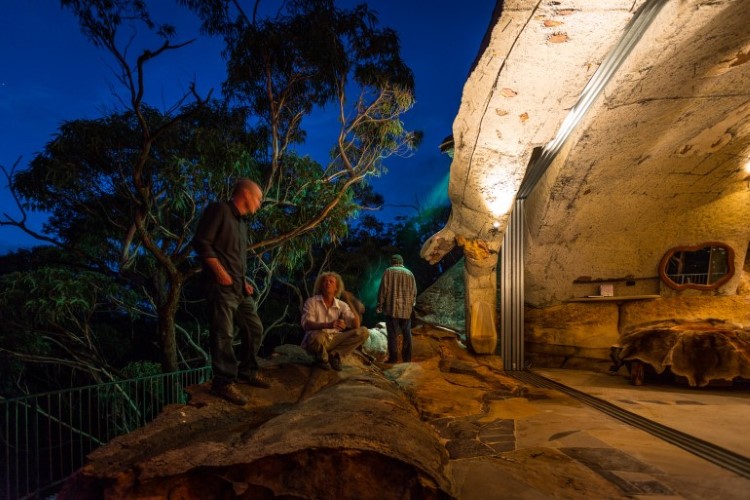 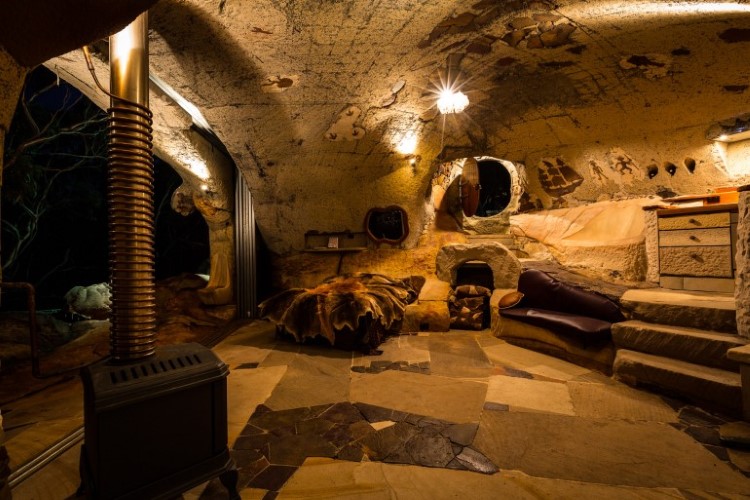 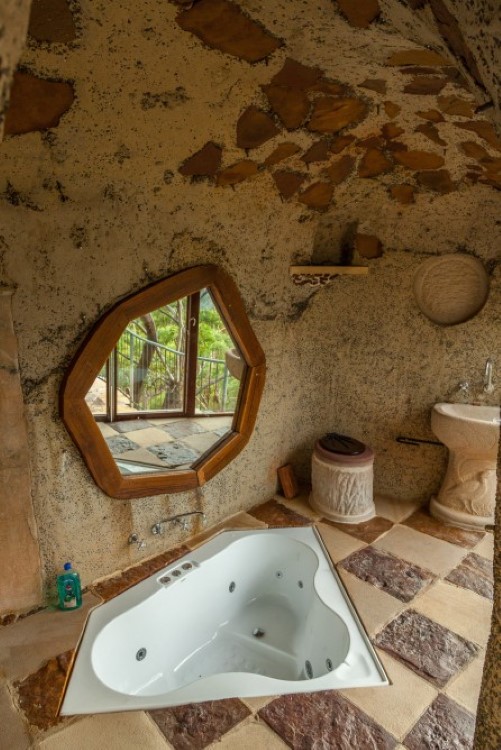 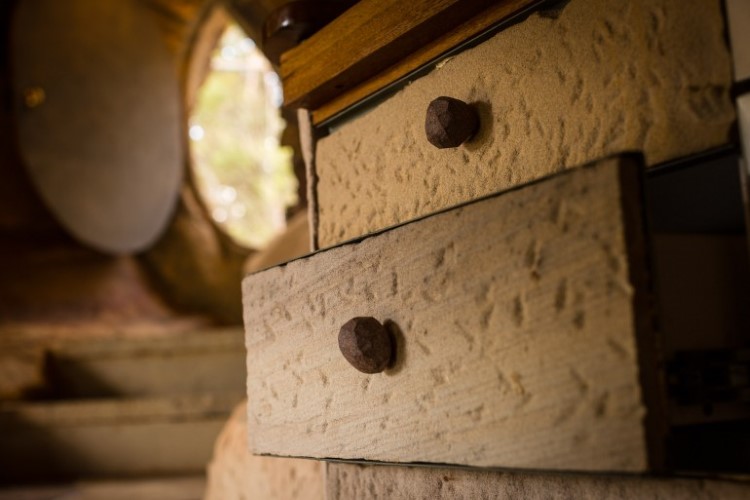 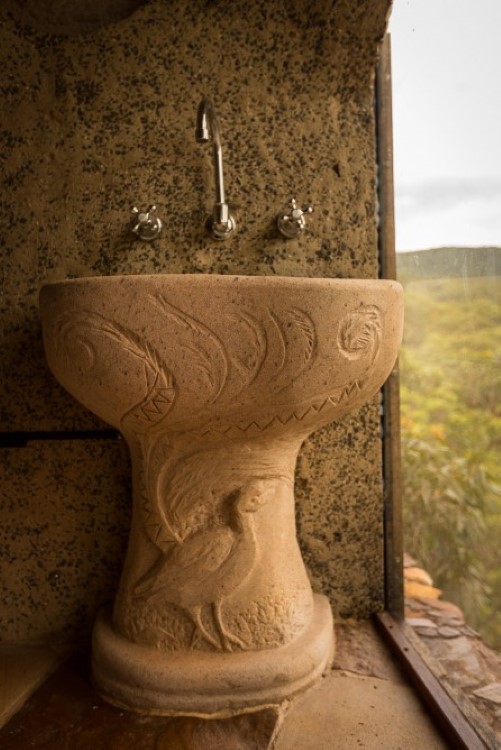 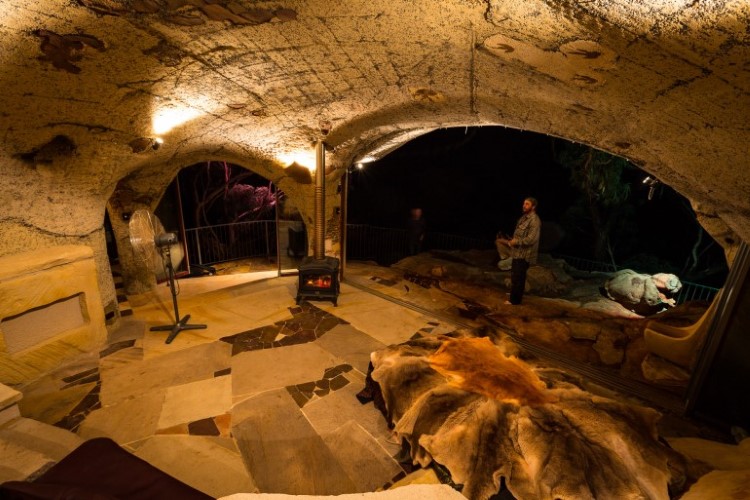 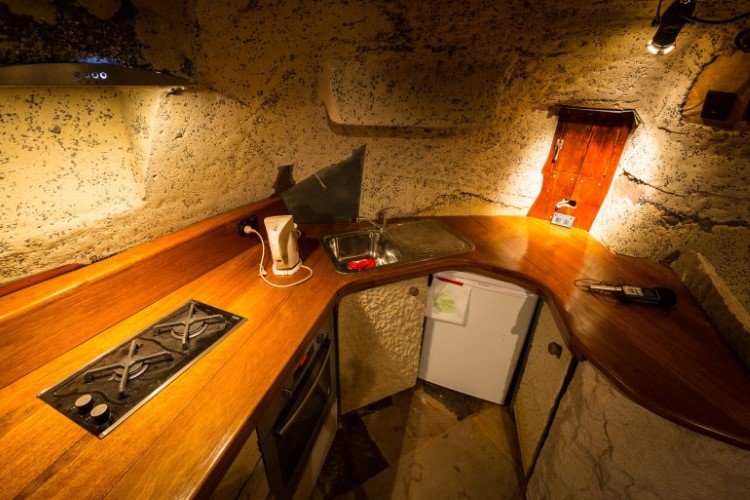