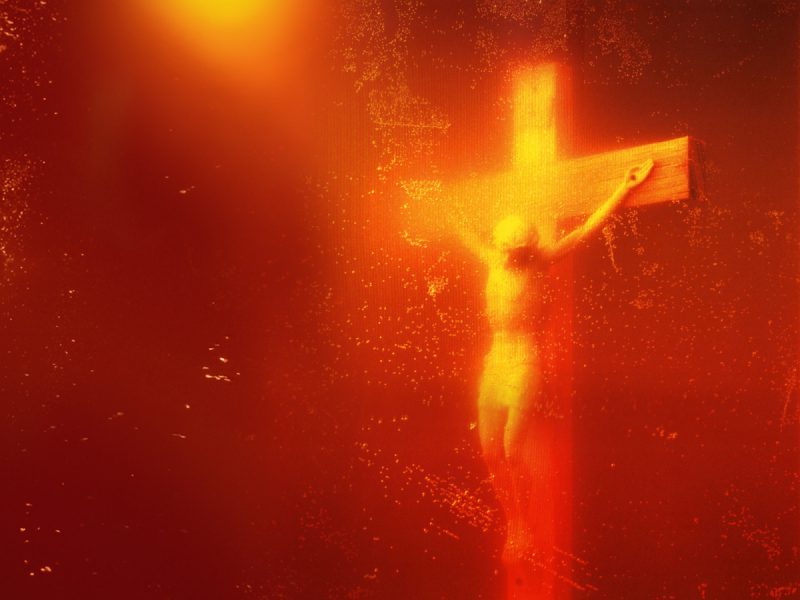 Artists have been pushing people’s buttons when it comes to creating works of artistic value for centuries. In doing so, they have also opened up a dialogue about which works of art should be permitted and who has the right to other people’s suffering.

artFido have compiled ten more works that rank as some of the most controversial ever made, featuring pedophilia, animal abuse, gratuitous nudity and the sacrilegious. It goes without saying these are slightly NSFW.

The Enigma of William Tell

Depicting Vladimir Lenin half-naked, and with a huge protruding buttock, this Salvador Dali painting seriously offended the surrealist community when it came out. This association was made worse by Dali’s appendant note. He wrote that “the buttock, of course, was the symbol of the revolution of October 1917.” When it was unveiled in 1934, many of his contemporaries tried to physically damage it, without much luck.

The Physical Impossibility of Death in the Mind of Someone Living

Damien Hirst has never been a stranger to controversy, often courting it to promote his works. A case in point is his 1991 instalment which preserved a dead tiger shark in formaldehyde. The exhibit managed to enrage both animal rights groups who thought the work was inhumane and art critics who thought that the work wasn’t art. When told that anyone could have made this work, Hirst’s response was simple: “But you didn’t, did you?”

Marcus Harvey probably knew what was going to happen when he painted Myra Hindley. As one half of the sadistic moors murderers, she is one of the most reviled people who ever lived. Adapting a police photo into a large-scale canvas, Harvey’s painting had to be protected by security guards after fellow artists threw ink and eggs onto it. Nevertheless, over 300,000 people attended the exhibition, making it a huge success.

The Polish-French painter Balthus had no interest in the modernist tradition, instead painting subjects he believed were close to his heart. Nonetheless, they are still imbued with a surrealistic tone. A case in point is “The Guitar Lesson,” where the guitar is on the floor and the female teacher is touching her underage student as if she is an instrument. An unsettling depiction of paedophilia, it hasn’t been exhibited since 1977. No one dares to put it on display.

The greatest painter of the 20th century, Pablo Picasso, knew how to rile audiences and art critics alike. This large oil painting from 1907 represented a new form of expression for the artist, being a key proto-cubist work. Yet, upon its unveiling in 1916, its frank portrayal of five nude prostitutes proved too much for many viewers. Henri Matisse was particularly critical of the work, calling it “hideous”, although this is probably because he was jealous.

Whilst it may seem rather tame nowadays, Thomas Eakin‘s “The Gross Clinic” was too realistic for most people in 1875. Depicting a medical procedure in an unashamedly frank tone, it represented a revolution in the way people understood surgery. Due to the rankness of the operation, and the calmness of the doctors, in comparison to the highly distressed woman on the left, its unsettling nature caused many audience members to be highly shocked.

Origin of the World

Gustave Courbet‘s “Origin Of The World” changed the direction of the nude forever. Instead of picturing her from far away, or in an idealised pose, the vantage point of the painting is from underneath her genitalia. More importantly, her face isn’t seen, only her body. Its realism was revolutionary at the time, and reprints of the painting in art books can still face censorship from the authorities today. More recently Facebook banned a French user who posted it on his profile.

This mixed-media painting by the Turner Prize winning Chris Ofili depicts a black Virgin Mary surrounded by images from blaxploitation movies and female genitalia. In addition to this, her bare breast was made from elephant dung. Unsurprisingly, when it was exhibited in New York in 1999, art critic Rudy Guiliani called it sick and disgusting and tried to sue the Brooklyn Museum to have it removed. Other enraged New Yorkers attempted to smear the plexiglass covering by throwing white paint and horse manure at the painting.

Also raised Catholic, like Chris Ofili, Andres Serrano sought to express his faith through “Piss Christ”, a photo depicting a small crucifix of Jesus submerged in, well, piss. He has received death threats and injunctions as a result of the 1987 work, but it has still managed to survive until now, although a print was irreparably damaged in France by Christian protestors.

The apex of Dadaist art, Marcel Duchamp‘s “Fountain” confounded people upon its unveiling. Taking a urinal and attaching the signature “R.Mutt” to it, the artwork was rejected by many galleries for not being what they considered art. Now it is recognised as a key philosophical statement regarding what we consider to be a work of value. In recent years performance artists have also tried adding to the urinal by, well, pissing in it.