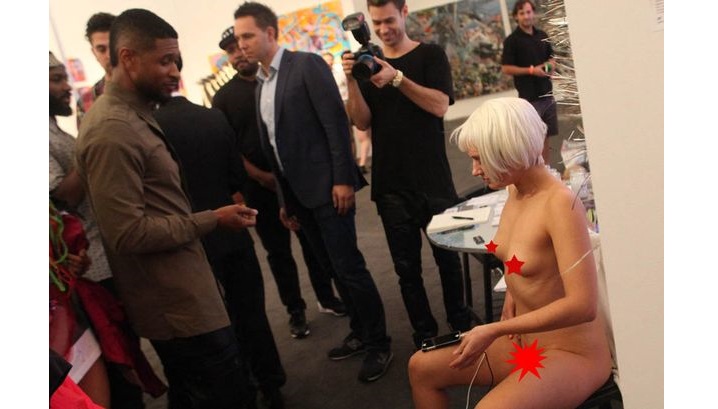 Warning: This post contains images of a very nude human iPhone charger.  It’s probably not art, and it’s definitely not suitable for work. Heck, it’s only just Safe For Home…

Even if you know very little about art you can enjoy the most prominent headlines coming out of the art world’s foremost bacchanal, Art Basel Miami Beach, which is on right now. The most mentioned artists of this year’s crop were Miley Cyrus, Kim Kardashian, Diddy and Drake… Have you heard of them? And, of course, Usher, who made some impromptu art by plugging a cell phone into a naked model’s vagina. Yup, this is all really happening.

so usher just walked into my exhibition and charged his phone in my friend’s vag #nsfw @VectorGalleryNY @SelectFairpic.twitter.com/zPciWID3SR

The story goes: One fateful day during #ABMB2014, Usher walked into Select Fair’s Vector Gallery booth. (Vector Gallery is, by the way, “The Official Art Gallery of SATAN.”) One installation on view, titled “Body As Commodity,” asked viewers to consider “whether using a doll for sexual pleasure commodifies sex more or less immorally than using a real body for amenities that can be monetarily quantified such as energy; the charging of a mobile phone.”

In non-artspeak, it invited viewers to charge their cell phones in the vaginal cavity of model Lena Marquise, who was naked. Of course, this was all to “exemplify the exchange of simulated sexuality for monetary gain”… because of Art. 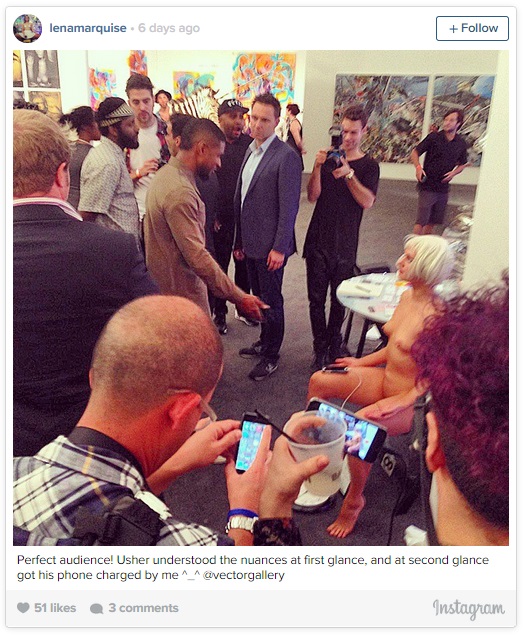 Usher allegedly paid the bargain price of $20 and stuck his phone into the battery pack, nestled inside Marquis’ person for a whopping 10 minutes. The creative interaction explored many pressing contemporary topics, it’s true. How a woman is still objectified for entertainment even in the supposedly progressive world of art. How celebrity and nudity still dominate the headlines of an art-centric event – we know, this headline included. How artworks meant to call the unsavory aspects of culture into question often end up affirming them.

While we are certainly shaking our heads at this artistic episode, it’s at least more vaguely related to art than the other trending Basel stories, which include Leonardo DiCaprio taking 20 women home from a nightclub and other completely no related art things.

But is it art?  Probably not.  A calculated and intentional stunt by the gallery to achieve some sensationalist publicity for the gallery? More likely.  Something bizarre mashed together by some space cadets who were high on illicit substances??? After watching celebrity gossip blogger art critic TMZ’s bizarre interview with Vector Gallery, we think it’s almost definitely the latter… 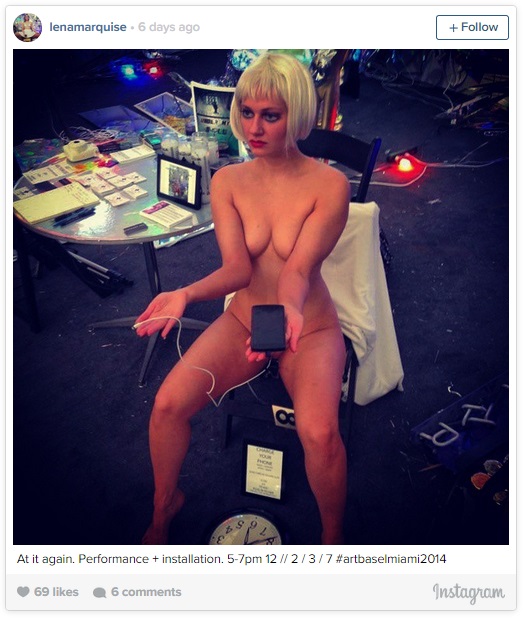