A local handicraft teacher was commissioned to restore the 16th century statue of St George inside a church in the town of Navarre –  but the finished product has been compared to a  ‘fairground carousel figure’, ‘a lead soldier’ and blasted as ‘barely recognisable’. 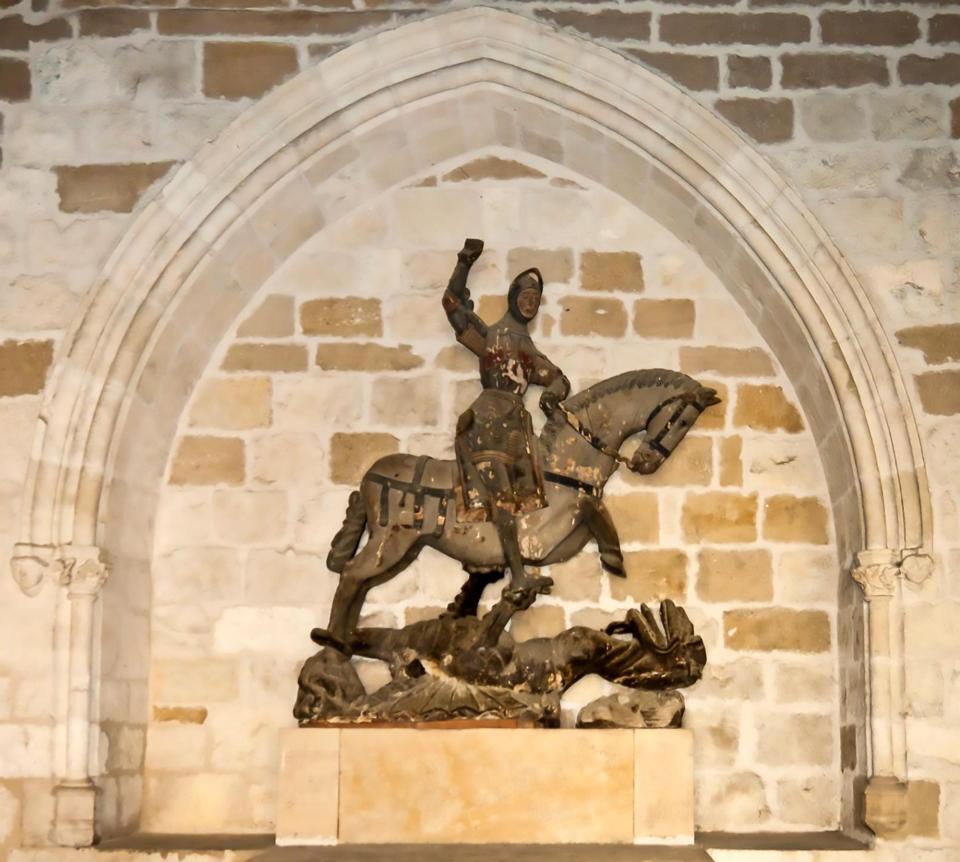 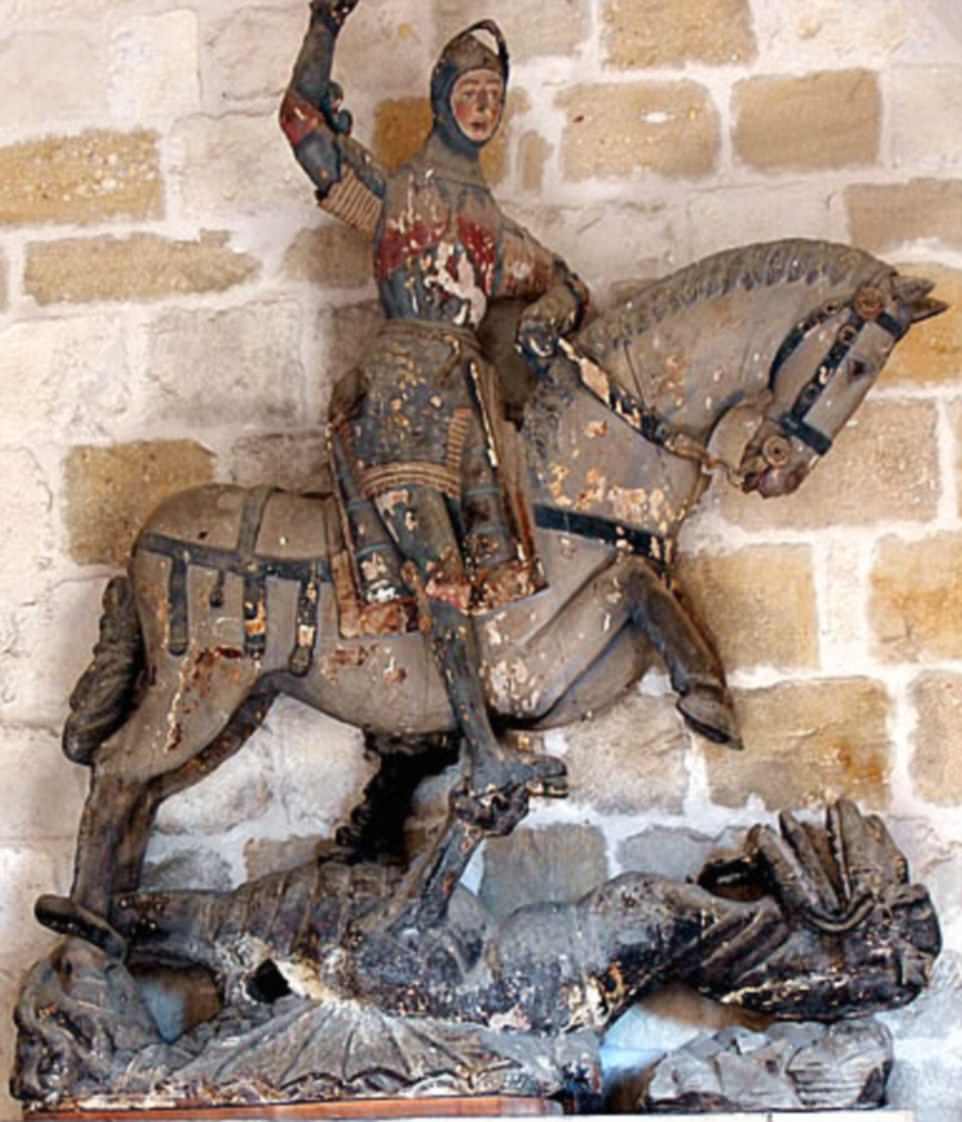 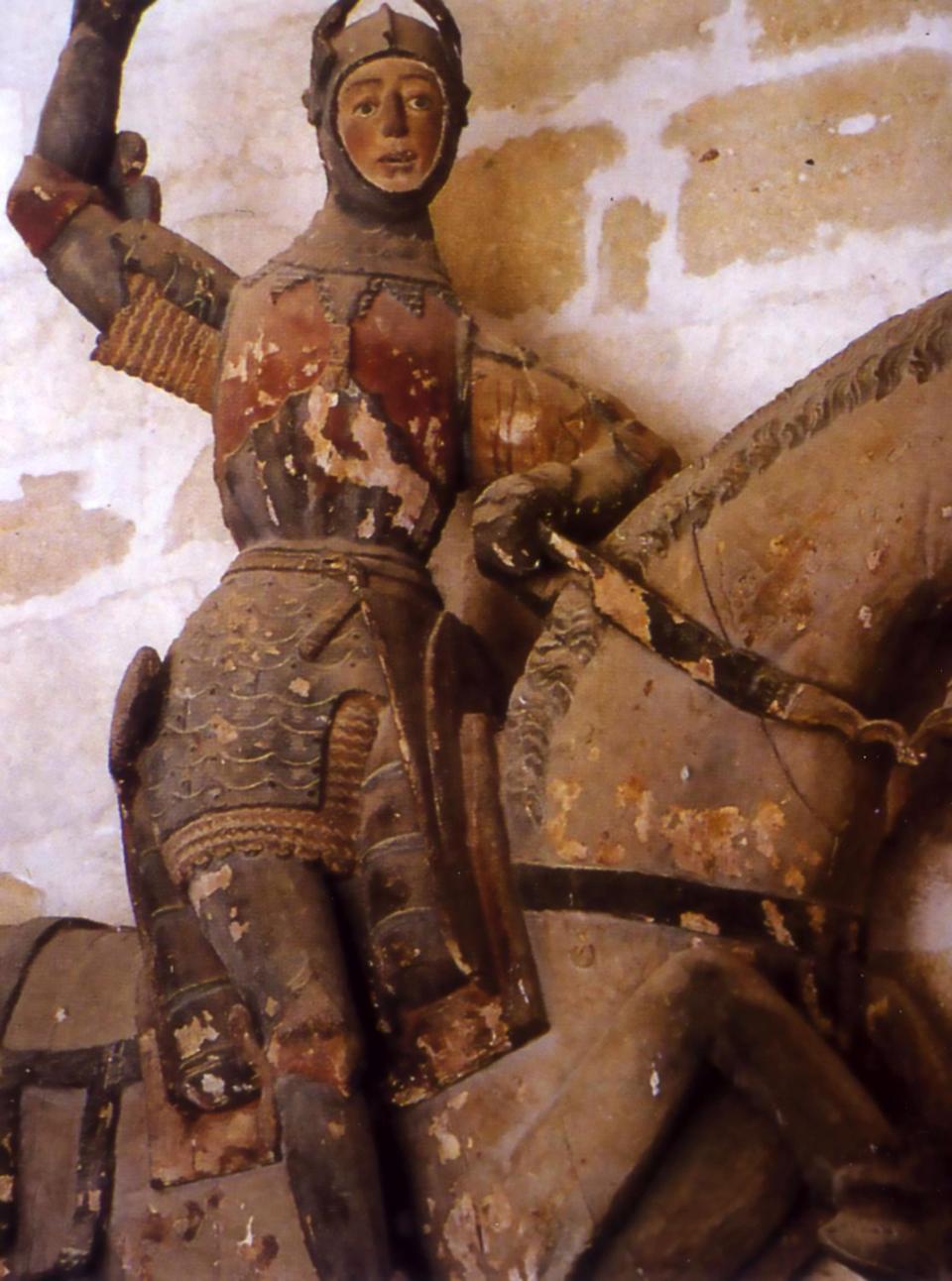 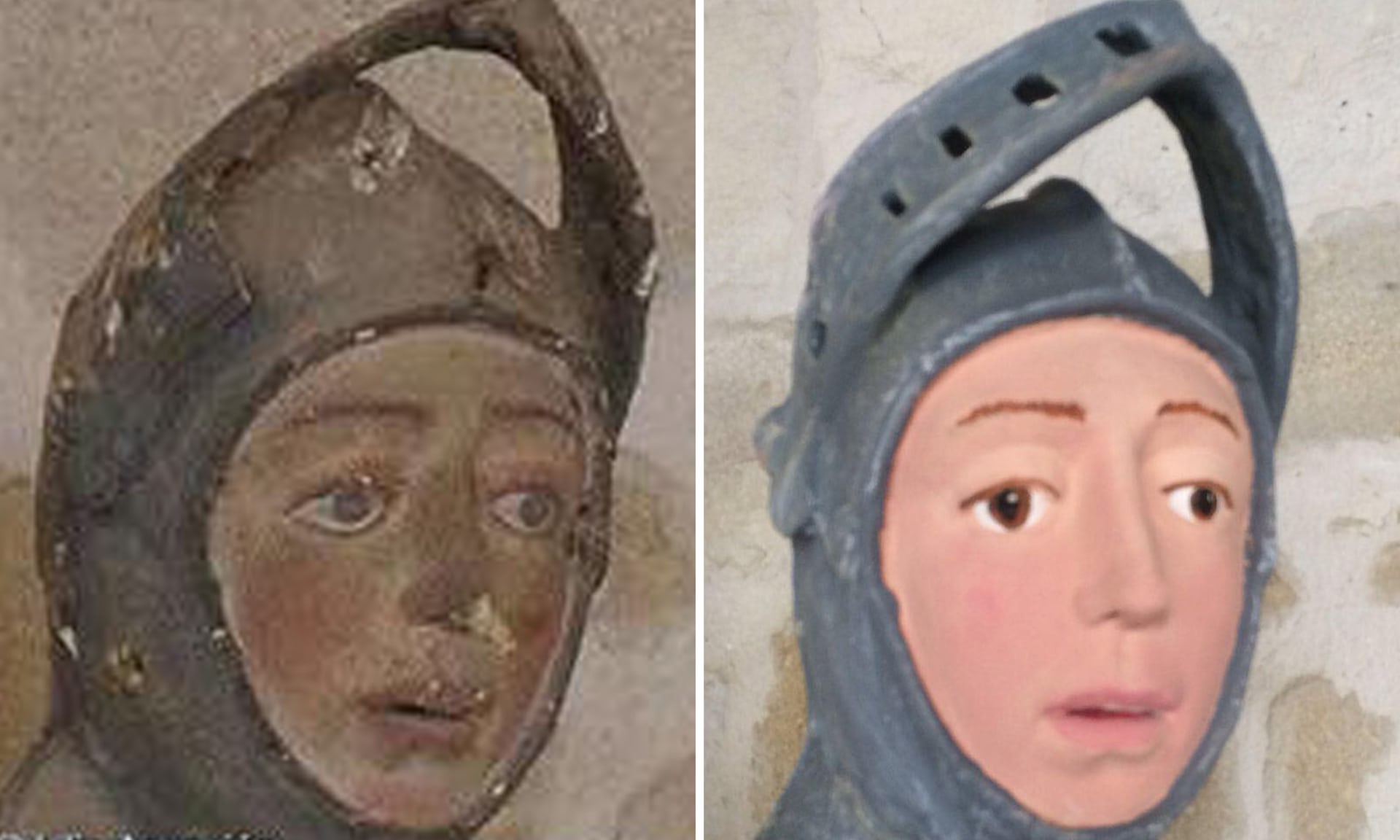 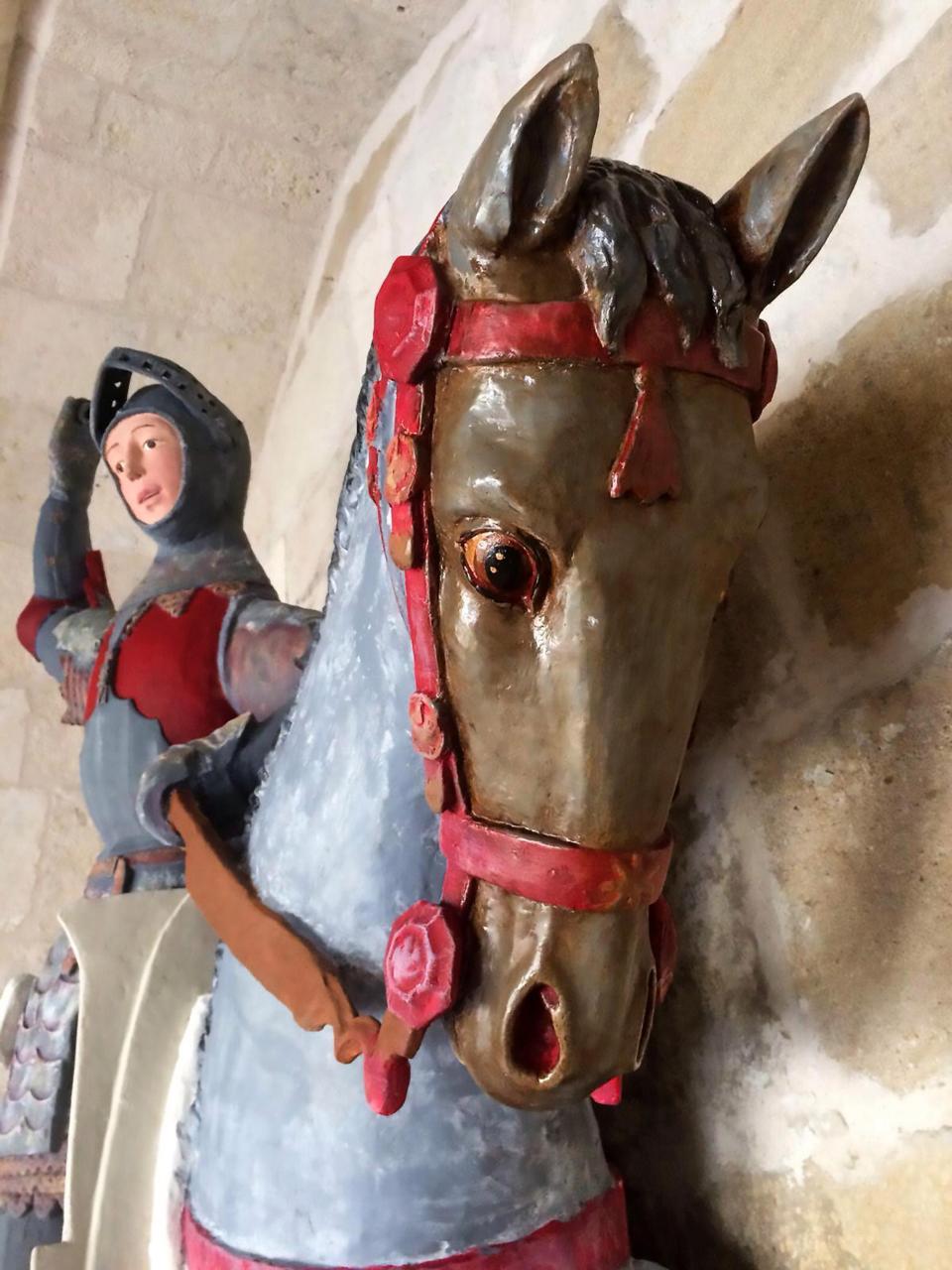 The statue of St George and the Dragon takes pride of place in the church of San Miguel de Estella in Navarre. It is believed to date back at least 500 years and shows the saint in his armour mounted on horseback with the dragon below him.

The statue was originally decorated in an ancient style known as ‘polychrome’ in which different colours are used but needed urgent restoration because of its advanced deterioration.

Conservationists say the restoration should have been tackled by an expert but was apparently undertaken by a small art school at the request of the local priest.

The result has caused outrage both in Navarra and further afield, with people asking what has happened to the sculpture.

The mayor of Navarro Koldo Leoz tweeted his anger at the botched job. He said: ‘Today #Estella #Lizarra is not news for its spectacular historical, artistic, architectural and cultural heritage in general, it is for an unfortunate performance in a carving of St. George of the sixteenth century that is in one of the imposing religious temples of the city.’

The controversy is such that it has been likened to the ‘Ecce Homo’ saga which catapulted the small village of Burgos to international fame when an 80-year-old disastrously tried to give the religious painting a facelift.

The village hit the headlines in 2012 when its cherished ‘Ecce Homo’ (‘Beyond the Man’) painting was renamed ‘Ecce Mono’ (‘Beyond the Monkey’) because of its very strange facelift. Octogenerian Cecilia Gimenez had the best of intentions when she tried to restore and repair damage to the portrait of Christ, which is nearly a century old.

Unfortunately, the work by the amateur painter didn’t go exactly to plan. The spectacularly bad results garnered worldwide attention and was dubbed one of ‘the worst art restoration projects of all time’.

‘Ecce Homo’ by Elias Garcia Martinez had held pride of place in the Sanctuary of Mercy Church since 1930. Critics said the face of Christ had been turned into a ‘hairy monkey’ in an ill-fitting tunic. Since the farce, however, Borja has become a mecca for tourists who want to see the treasure for themselves. It is visited by hundreds of thousands of visitors every year who are now contributing to the church’s swelling coffers. The painting has never been changed and remains as Cecilia intended. The image has even appeared on lottery tickets. 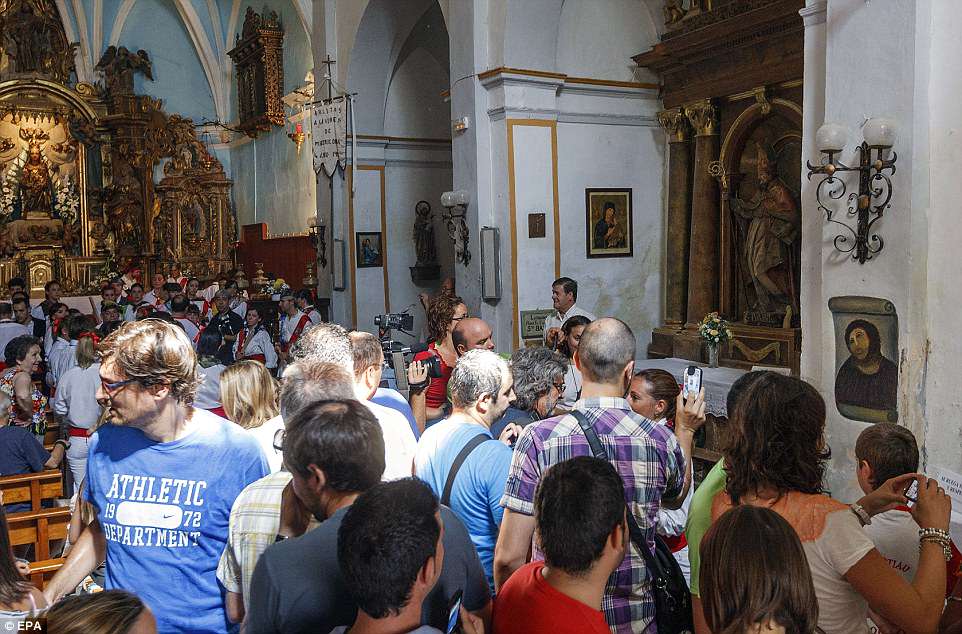 It’s not sure what will happen to the newly botched St George statue. Koldo Leoz, the Mayor of Estella, admitted that the “restoration has left a lot to be desired as it is an artwork from the 16th Century and, if nothing else, care should have been taken of the materials used for the restoration.” He said that the priest, named Jose Miguel, should have asked for permission first from the city council and a specialist would then have been assigned to oversee the restoration.

“That did not happen and now the original statue, which had some faded colours, has been completely covered by the new paint” the Mayor said. “If they had involved us, our heritage department would have liaised with the regional government and got advice over the best way of handling the restoration.”

The mayor also complained that there was in general a “lack of control over the Church’s heritage, which should be in the hands of public administration.” He added that churches received money from the public and that there was a need for greater control to ensure “something like this never happens again.”

Carmen Usua, who works for art restoration company ArtUs, shared details of the vandalism of the statue on social networks and claimed that “it looks like a ‘ninot’ (a cardboard sculpture typical of the Fallas festival in Valencia). She said the restoration had involved covering any cracks in the statue using plaster and then painting it with a totally new colour scheme that bore no resemblance to the original subtle colouring of the 16th-Century artist.

She added: “The livery of the horse was originally coloured silver with subtle gold lines and although dirty, it was not lost and could have been recovered with careful restoration. Instead everything has been covered in red paint in an act of vandalism that defies belief.”

Miguel Zuza, a member of the Navarre Council of Culture, told local media that “this statue had the typical characteristics of a gentleman of the 15th or early 16th Century. Now it has been butchered and looks like a carousel figure.” 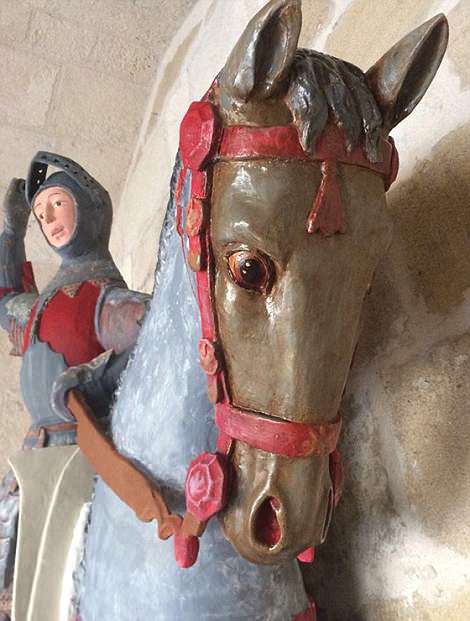 Social media users flooded the internet with comparisons to the botched statue. Many compared the statue to children’s cartoon characters.

Another likened the statue to Marty Feldman’s Igor in Young Frankenstein.

Finally one also likened the restoration to a character from Disney’s the Sword in the Stone. 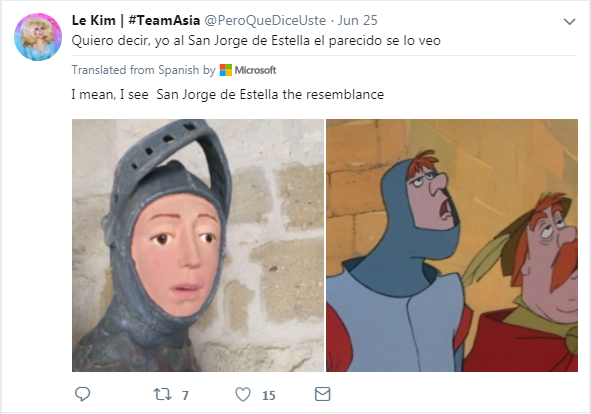 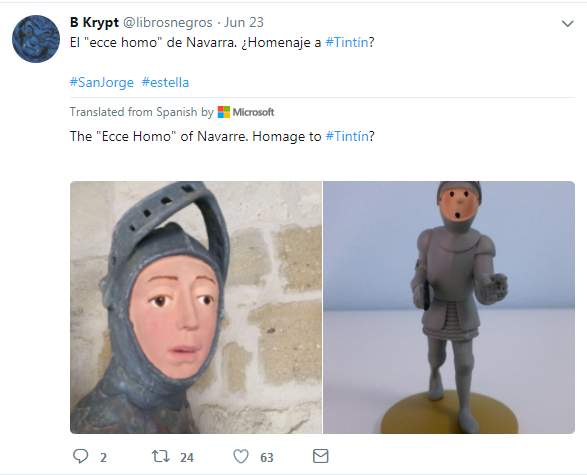 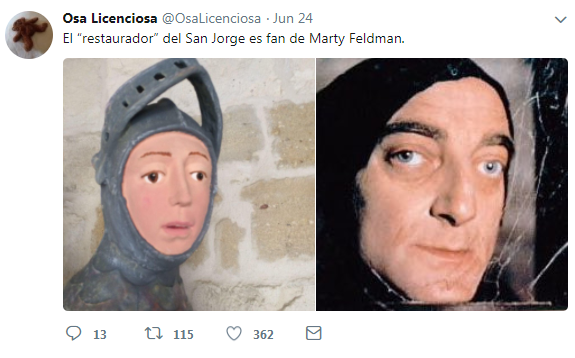 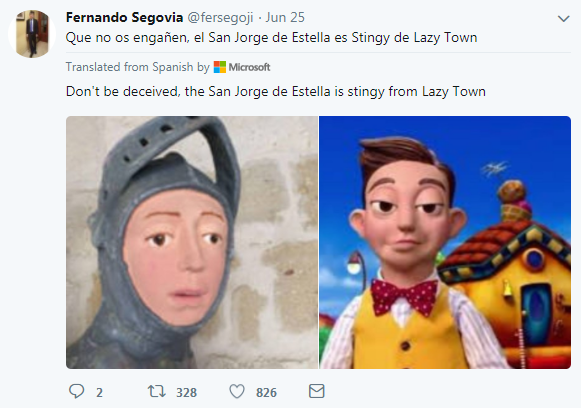