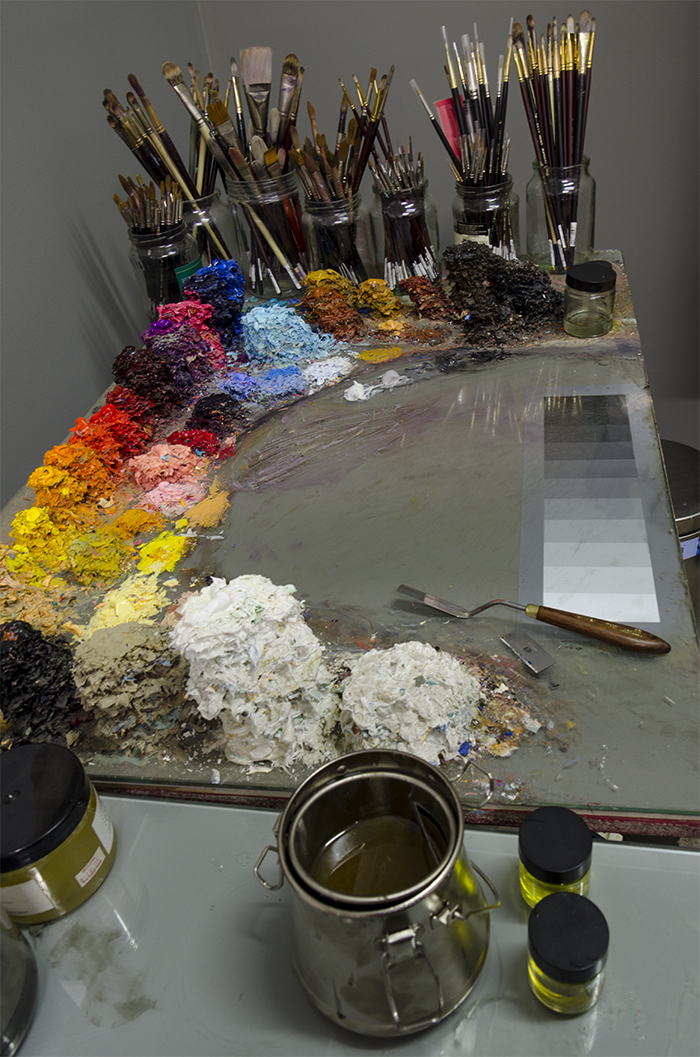 We were lucky enough to be invited inside the artist studios of art power couple, Jim Thalassoudis and Dianne Gall in Bowden, South Australia recently. The pair originally met at the South Australian School of Art in the 1980s and have been painting together ever since.

Dianne paints in the style of contemporary realism, with her works evoking the memory and emotion of past Hollywood glamour and sense of the unknown. Each painting captures a moment in time, anticipating events about to unfold. Dianne is represented by Brenda May Gallery and currently has a number of works for sale on artFido which you can see HERE.

Jim’s also paints in the style contemporary realism, with his paintings coming from an intense observation of the sky and sensitivity to tiny changes in hues and colours of the atmosphere. His works will make you look above the daily grind, traffic noise and loud neon shop fittings, to where the sunset glistens against gilded Victorian domes of town halls and train stations. Jim is represented by Charles Nodrum Gallery and also has a number of works currently for sale on artFido which you can see HERE.

While we were in the studio, we were struck by how neat and tidy team DiJim were.  Upon entry into Jim’s studio, we were greeted by an immaculately clean painting bench with piles of oil paint arranged neatly in rows (one of Jim’s current projects is to turn these colourful oil piles into “Fallen Cloud” sculptures!), and upturned paint brushes placed neatly in glass jars. Dianne is not to be outdone in the neatness stakes, with her studio containing mannequins dressed in stunning 1940’s dresses, beautiful paintings strategically placed along the walls, and her latest portrait waiting patiently to be completed.

We hope you enjoy the images of Jim and Dianne’s studio as much as we enjoyed visiting it… like a kid in a candy store!

Close up of Jim’s oil paint in sculptural piles.

Jim’s collection of odd objects and “Fallen Cloud” oil sculptures in the making.

Jim’s painting desk with some cloud reference photographs and a freshly stretched canvas waiting to be painted.

Images of the rest of Gallery DiJim:

Outside the art studio of Dianne Gall and Jim Thalassoudis in North Adelaide.

Jim Thalassoudis “One Perfect Day” oil on linen, 17.8cm x 17.8cm in a handmade frame with a black clay finish
(the couch and cushion are used in Dianne’s work “Pensive” above!)

One more shot of Jim’s sculptural piles of oil paint!

People that paint together, stay together! Jim Thalassoudis and Dianne Gall.

.
And don’t forget, if you’re looking for a piece of original art to hang on your walls, check out artFido HERE!