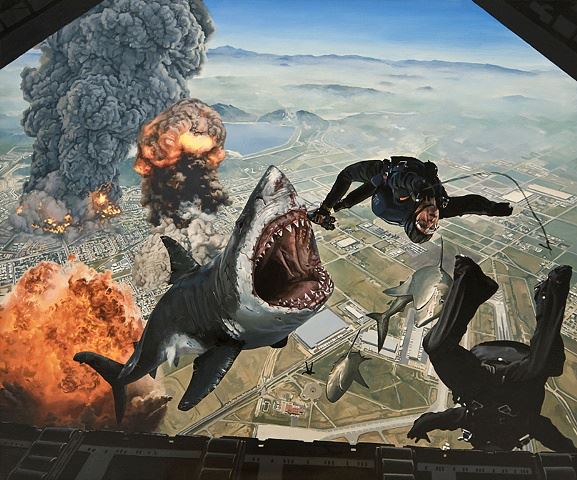 Sharknado is getting a lot of buzz at the moment. Why wouldn’t it? Sharks caught in a hurricane (yes apparently its a hurricane not a tornado. Sharkicane just doesn’t have the same ring to it) being flung all over Los Angeles. Sounds like an amazing premise for a movie. A TV movie. On a SyFy channel. But Sharknado could hardly be called art. Could it? In contrast, the amazing works of Caleb Brown are most definitely art. Fine, fine art.

Caleb’s ability to take the surreal and paint it in such fine, realistic detail has been applauded by many galleries and collectors around the world. In his works you’ll see sharks snapping at skydivers, otters peering over skyscrapers and bugs terrorizing tourists. Taking contemporary concepts and giving then a fictitious bent, Caleb Brown’s satirical look on life is both disturbing and refreshing. Just what we look for in our art.

“My paintings are cultural allegories that aim to reflect my view of the modern world. My conceptual process begins by selecting themes and elements of contemporary life (such as media culture, genetic engineering, globalization, etc.)which seem important and interesting to me. I then combine and expand those components into completely ridiculous scenes that depict a fictitious near-future or alternate reality. I attempt to balance the utter implausibility of these scenes by painting them as convincingly as I can. I have, over time, developed these images into several reoccurring motifs that continue to describe more fully a world that reflects (and develops parallel to) the ‘real world.’

My hope is that by employing this editorial and often satirical method of expression, rather than using a more journalistic approach, I might communicate my observations and feelings about our modern existence more aptly than by painting actual images of contemporary life.”

Caleb Brown attended the University of Puget Sound in Tacoma, WA where he earned a Bachelor of Arts with a studio art major. He continued his education at Boston University from which he was awarded a Master of Fine Arts in painting in 2007. Caleb is 32 and currently lives and works in New York City.