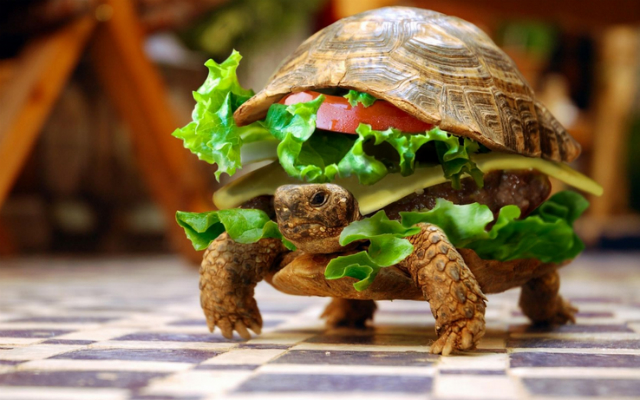 The South China Morning Post just reported that a man tried to smuggle his pet turtle through customs by hiding it in a KFC hamburger container and between two slices of a bread bun. Yes, really.

The incident occurred on the morning of July 29, when a man, surnamed Li, was about to board China Southern Airlines flight 345 to Beijing, Guangzhou Daily reported. As Li passed through airport security, X-ray screening machines detected a few “odd protrusions” sticking out of a KFC burger that the man had packed in his bag.

“There’s no turtle in there, just a hamburger,” Li reportedly insisted. “There’s nothing special to see inside.”

Li finally acquiesced to an inspection after repeated requests from airport staff, who uncovered the pet turtle hidden inside the burger. When asked why he had devised this strange idea, Li said that he had only wanted to travel together with his “beloved” turtle.

After staff patiently explained that turtles could not be smuggled on board the plane, Li reluctantly agreed to allow a friend to care for his pet while he was away.

Wow. Mr Li must have really loved that turtle.

.
And don’t forget, if you’re looking for a piece of original art to hang on your walls, check out artFido HERE!