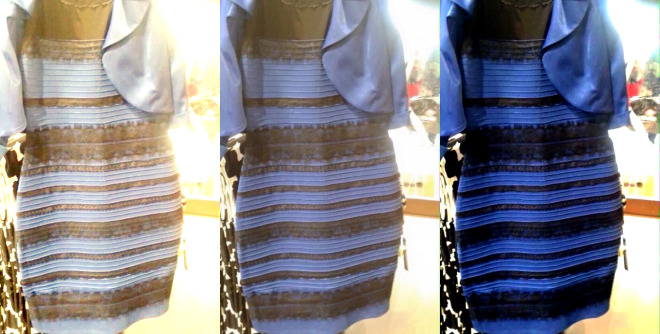 The Internet is going crazy debating the colors of this dress, with #thedress, #whiteandgold, #blueandblack, #dressgate and other hashtags trending on twitter world-wide. According to three quarters of the people in one poll (including the author), it is gold and white. On the other hand, a solid minority see it as black and blue. 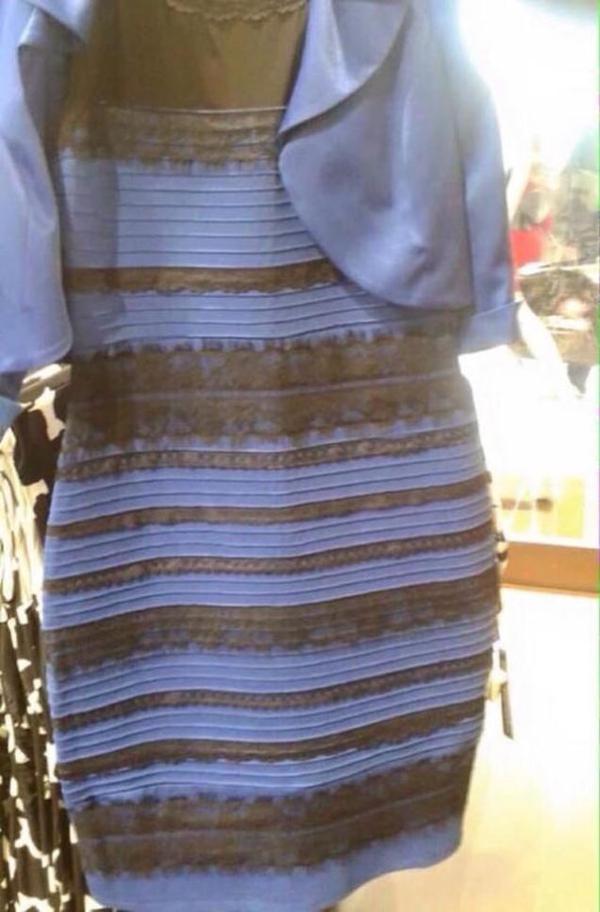 People have even registered twitter handles such as @thedressisblue and a compromise faction is trying to push blue and gold.

While no single conclusive data exists, multiple lines of weaker evidence can add up to a strong case. Everything credible we can find does favor black and blue. Adobe, who might be expected to know, has endorsed Hope Taylor’s use of color analysis to conclude the dress is black and blue, and Google image search seems to agree. That certainly hasn’t been enough to convince everyone whose arguing that a tweak of the color balance reveals white and gold.

The dress problem has been solved s/o to @Adobe and @Lightroom ok night pic.twitter.com/iEHK8Puotq

One can’t trust stray photographs lying around the Internet to be untouched (or of what they claim), but there is no question the dress comes in a black and blue version, while no one seems to have found a similarly definitive white and gold copy. There will probably be a lot of people trying to claim they have orignated something this big, but this interview with singer Caitlin McNeill who apparently posted the first photograph also supports the black and blue version.

But why are we seeing it differently?

First up, let’s rule out it being about the screen you’re looking at. Different people can look at the same screen and swear they are seeing different things. On the other hand, most people looking at it on different devices may see subtle differences (I see a little more blue/mauve on my phone than on the desktop), but not the drastically different perceptions the “other side” are experiencing.

It’s also probably not about your eyes. It’s true people have differing ratios of red to green cones. This can cause subtle differences in how we perceive color, particularly under faint light—for example, stars that for some people look red, look white with maybe a pinkish hint to others. However, these physical differences don’t produce an effect large enough to explain the dramatically different perceptions here.

Instead, it seems what we are experiencing is an example of top-down processing, where we see what our brain expects, such as in the case of this optical illusion where the two colored squares are actually identical. 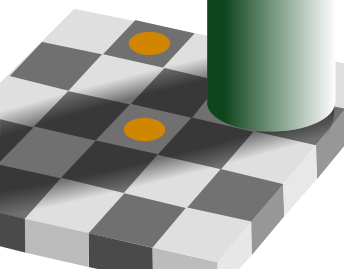 But it seems that the most popular explanation—at least on Reddit, but also agreed upon by the brilliant ASAP Science—is that this is an example of a phenomenon known as color constancy. This ability ensures that the perceived color of an object remains constant, despite changes in the illumination conditions. That means the context, or surroundings, in which an object we are looking at appears in, influences our perception of its color. In the case of this dress, it is photographed so close up that we don’t actually know its surrounding environment, so our brain starts to make interpretations about the light falling on it. If people envisage that it’s located in, say, a room lit by blueish natural daylight, perhaps near a window, they may see it as white and yellow because our brain tries to remove the blue as a possible shadow. Alternatively, some may picture it under artificial lights, like those found in shops, and so they see it as blue, which is indeed the true color of the dress. Still, it’s not entirely clear what it is about the colors of the dress and the lighting that cause it to hit a sweet spot that divides the community so drastically

Check out this video for more information: