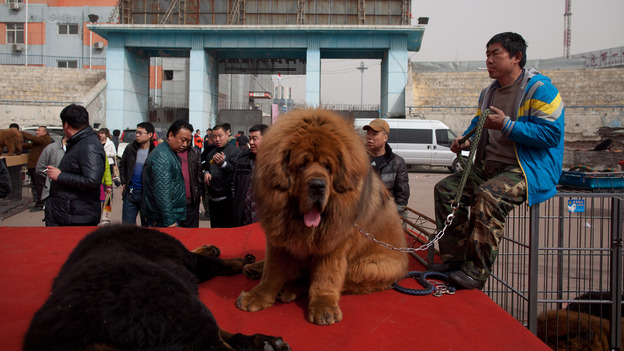 Visitors to a zoo in China got a rude surprise when the lion started barking. Turns out it was no lion, but just a Tibetan mastiff – a large, hairy breed of dog which – for what it’s worth – more closely resembles the king of the jungle than perhaps any other domestic canine.

Apparently, officials in Louhe City Zoo in Central Henan Province, China hoped no one would notice when they decided to make the switch and send the enclosure’s regular resident, an African lion, away to a breeding center.

“One family surnamed Liu took their six-year-old son to the zoo in People’s Park,” reported the local Dahe Daily newspaper.

“On the way, Mrs. Liu was teaching her son all the sounds that the different animals make. But when they arrived, her son said the lion was barking like a dog.” Mrs. Liu told the Beijing Youth Daily: “The zoo is absolutely trying to cheat us. They are trying to disguise dogs as lions.”

It turns out that the dog-for-lion swap wasn’t the only attempt to pull the wool over the eyes of zoo patrons: there was also a domestic dog housed in the wolf pen and a white fox was found pacing the leopard exhibit.

“There was no official explanation for the change of exhibits, but one zookeeper said the lion had been sent away for breeding. Yu Hua, a spokesman for the People’s Park said that the zoo had been run by a private businessman for several years, at an annual rent of [$17,000]. Many Chinese zoos have struggled to make money in recent years, after a government ruling that animal shows should cease and that they should operate on a non-profit basis.”

Make sure you check out the fabulous original artwork featuring dogs on artFido HERE!