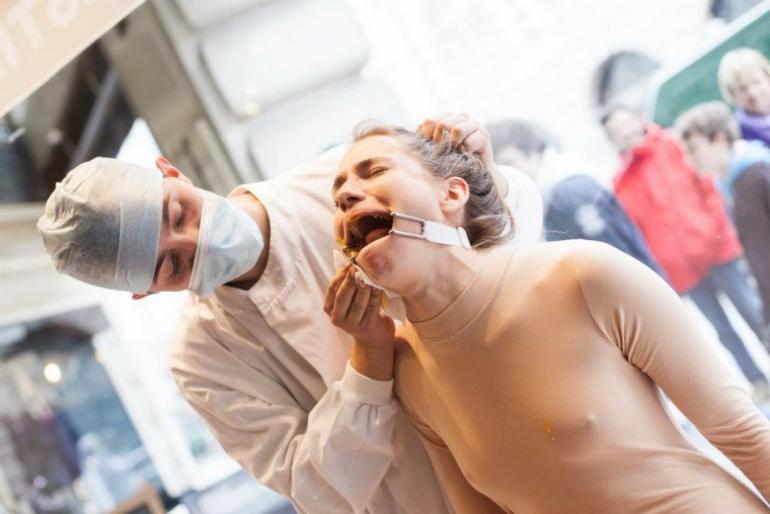 Following on from our previous post where a performance artist showed her lady parts in front of the painting “The Origin of the World” at the Musee d’Orsay (see HERE), another performance artist has gone to great lengths to make a point.

A young woman was restrained, force-fed and injected with cosmetics in a high street shop window as part of a hard-hitting protest against animal testing. Jacqueline Traide was tortured in front of hundreds of horrified shoppers in a bid to raise awareness and end the practise.

The 24-year-old endured 10 hours of experiments, which included having her hair shaved and irritants squirted in her eyes, as part of a worldwide campaign by Lush Cosmetics and The Humane Society. The disturbing stunt took place in Lush’s Regent Street store, one of the UK’s busiest shopping streets.

Jacqueline appeared genuinely terrified as she was pinned down on a bench and had her mouth stretched open with two metal hooks while a man in a white coat force-fed her until she choked and gagged. The artist was also injected with numerous needles, had her skin braised and lotions and creams smeared across her face. 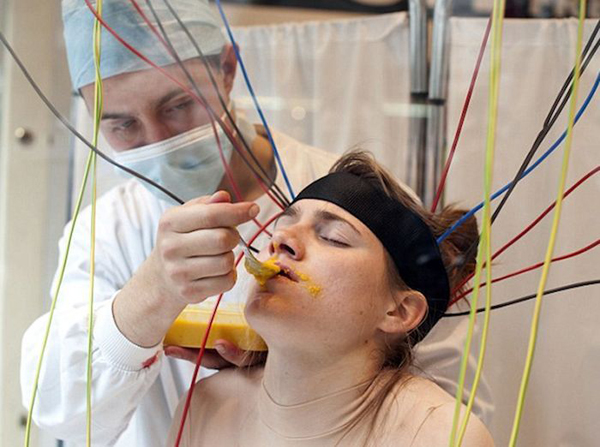 Passers-by were gobsmacked to see Jacqueline, a social sculpture student at Oxford Brookes University, forced to have a section of her head shaved. The gruesome spectacle aimed to highlight the cruelty inflicted on animals during cosmetic laboratory tests and raise awareness that animal testing is still a common practise.

The Humane Society International and Lush Cosmetics have joined forces to launch the largest-ever global campaign to end animal testing for cosmetics.

Lush campaign manager Tamsin Omond said: “The ironic thing is that if it was a beagle in the window and we were doing all these things to it, we’d have the police and RSPCA here in minutes. But somewhere in the world, this kind of thing is happening to an animal every few seconds on average. The difference is, it is normally hidden. We need to remind people it is still going on.”

For more information about the campaign, visit www.fightinganimaltesting.com