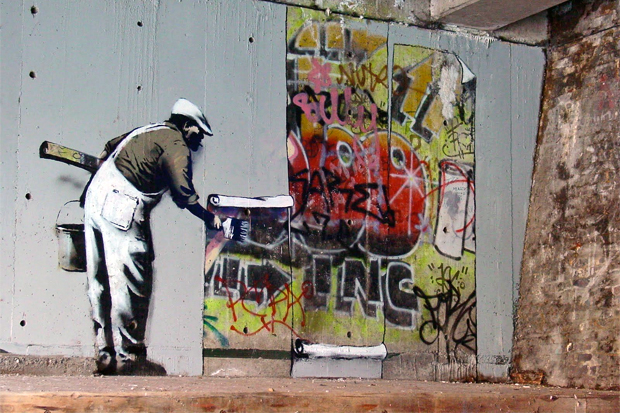 UPDATE: according to TEAM ROBBO and confirmed by banksy.co.uk, Robbo passed away on 31 July 2014 due to health complications. R.I.P.


With Banksy taking over the streets of New York City during October 2013 as part of his “Better Out Than In” residency (follow it all HERE), we thought we’d look at the history of street art and graffiti in the UK.  Then we came across the Banksy vs King Robbo (street art vs graffiti) feud thanks to another story by Jack McKain.  We’d heard about this feud in passing, but never in this detail.  Sit back and enjoy…

Almost thirty years ago, in 1985, a London graffiti artist by the name of “King Robbo” threw this piece up in the Regent’s Canal tunnel in Camden. Little did he know that he would still be working on it decades later…

The below image is of the exact same piece in 2006. It had been scribbled on, tagged, and painted over to the point that the original was almost completely cover up and barely visible.

Out of nowhere came infamous London street artist Banksy in 2009. In his signature stencil style, he painted a city worker covering the now grey walls with “graffiti wallpaper.” Banksy’s style is so unique and well-known that he oftentimes doesn’t even include a tag with his work. People started buzzing all over town; this had just sparked a battle between legends.

Upon seeing Banksy’s alteration to his original piece, King Robbo was not happy. His work had not been seen in public for over a decade, yet he came out of retirement to strike back against Banksy. According to King Robbo, in an exclusive interview, “He broke a graff code of conduct and for a lawless community we have a lot of laws, so I had to come back. What people don’t realise is that he’d already gone over loads of my stuff before and I hadn’t bothered retaliating but this time it was just so deliberate, so cowardly. If you’ve got the hump about something, you send a message and discuss it like gentlemen, you don’t wipe out a piece of graffiti history. But that’s what he does, never expresses his own opinion, he puts something out and lets people fool themselves, he’s smart in that respect.”

So King Robbo struck back with the below rebuttal piece which was painted on Christmas day in 2009. King Robbo said of his piece, “it was actually pretty sloppy, I’d gone out Christmas morning, done it quickly and just thought ‘fuck it’. I didn’t even know how to post it on the Internet afterwards let alone think it would cause the fuss it did.” The media immediately jumped on this and all of London was talking about it. The street art vs. graffiti war had begun, and was now in full force. According to legend, there was an encounter in the late 90s between King Robbo and Banksy. King Robbo claims that he ran into Banksy at a party, and Banksy “decided to get cocky and say ‘I’ve never heard of you,’ so I gave him a swift backhand and said ‘you may never have heard of me but you’ll never forget me’ and that was that.” King Robbo is convinced that Banksy’s attack on him was a deliberate retaliation for his disrespectful actions.

Banksy retaliated a few months later in 2010. The plot thickens… Robbo made a simple edit: “Fucking Robbo” back to just “King Robbo.”

The street tunnel canvas goes black. Nobody knows why…

Ah! King Robbo is back in late 2010… This time with a serious attack on Banksy.

Black again. Perhaps the city is trying to put an end to this?

Enter Banksy with a chalk-drawn living room. Why? I guess that’s just his style. Soon after, in April 2011, King Robbo was hospitalized and fell into a coma 5 days before his exhibition at the Signal Gallery, Shoreditch: “Team Robbo – The Sell Out Tour.” He had been found unconscious in the street with life-threatening head injuries and his health has been in question ever since. It is believed that Robbo may have fallen down the stairs and banged his head – although the incident was never investigated by police.

Upon hearing the news about King Robbo’s health, Banksy threw up “an ode to King Robbo’s original with a single, flammable spray can displayed as a vigil.” Despite the feud between them, Banksy told The Observer in a statement, “I wish Robbo a full and speedy recovery.” It’s nice to know that no matter how nasty the battle got, Banksy still is considerate of the fact that King Robbo cannot retaliate in his current state.

The mural was restored to “its original form with slight changes by the other members of ‘Team Robbo’ on December 24, 2011,” but the restoration has since peeled away to leave the black and white tribute to King Robbo as of September 2012. The battle has officially been put to rest… for now. 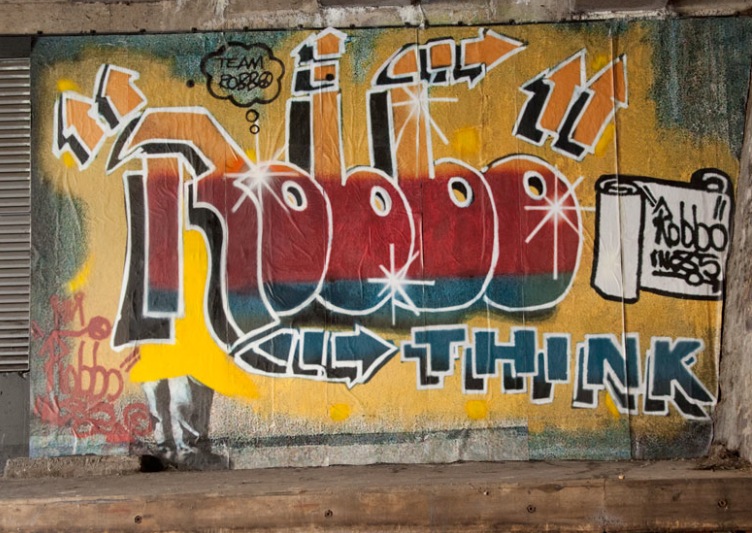