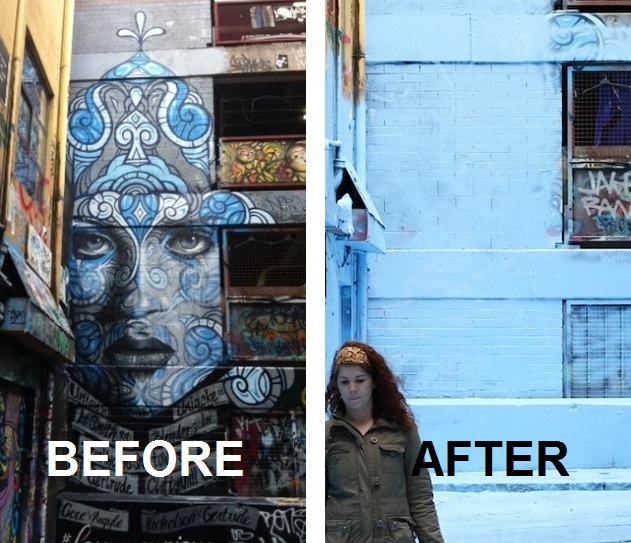 As we’ve previously written HERE, street art in Melbourne, Australia, has come a long way since the days of “zero tolerance” where street artists were considered vandals and fines and arrests for perpetrators were commonplace. As Melbourne’s street art culture has evolved and street art has become a major tourist attraction for the city, however, local authorities have begun to recognise the craft and some have even looked at ways to support the moment.

Probably the most well known “street art sanctioned” zone is Hosier Lane and Rutledge Lane in Melbourne’s CBD (read about Hosier Lane HERE). You can walk up and down these lanes at any time of the day or night to find both street artists putting up new pieces and observers with their iPhone in hand ready to capture that perfect photo.

We were therefore shocked and amazed to stumble across Rutledge Lane on Sunday to discover artist and street art campaigner Adrian Doyle in the process of covering Rutledge Lane from top to bottom – including all of the street art, tags, bins, road and all – in blue paint.

Images above thanks to Khoon Sorasiri.

The following images are courtesy of David Russell from Invurt 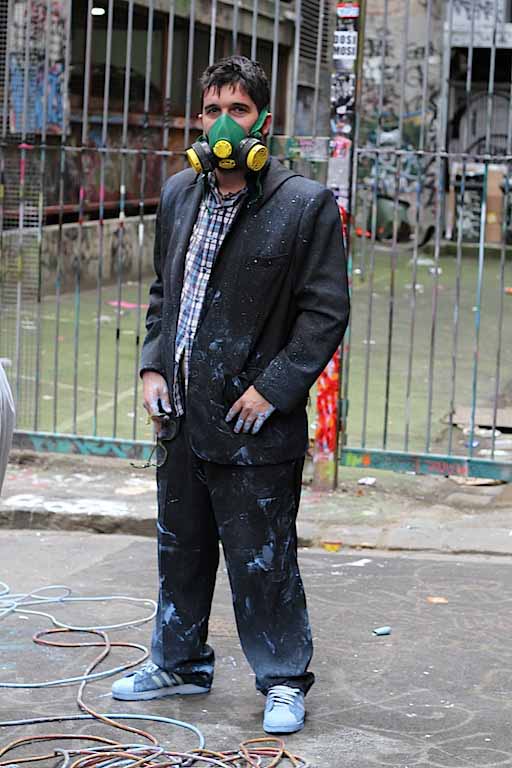 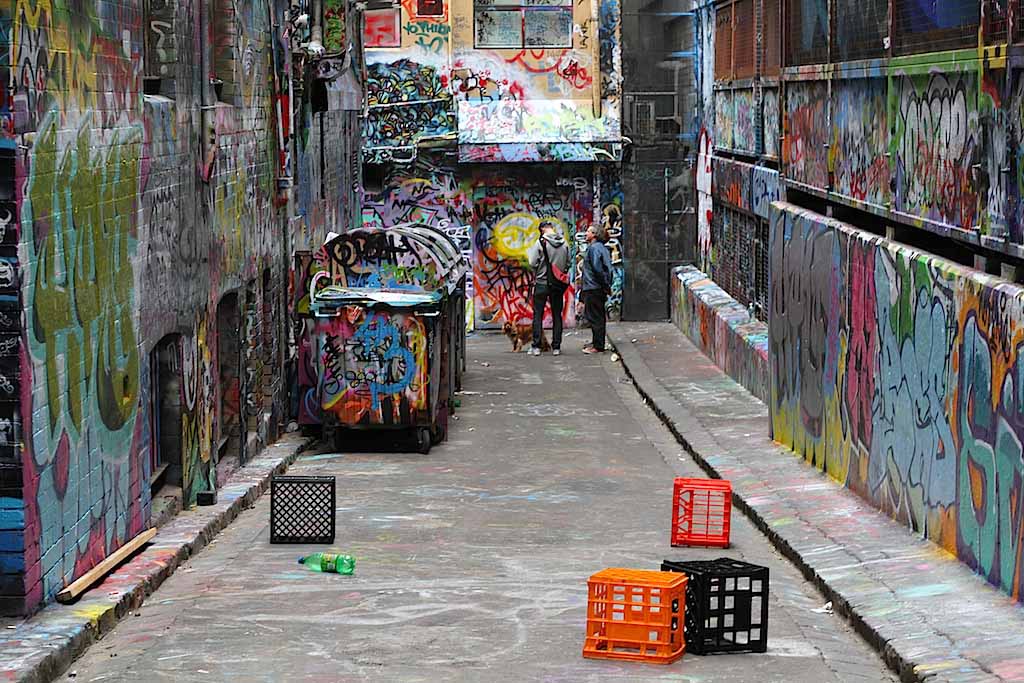 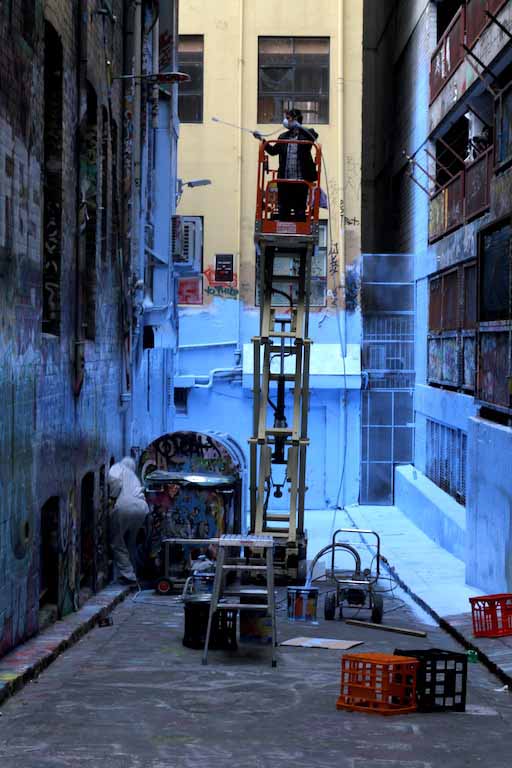 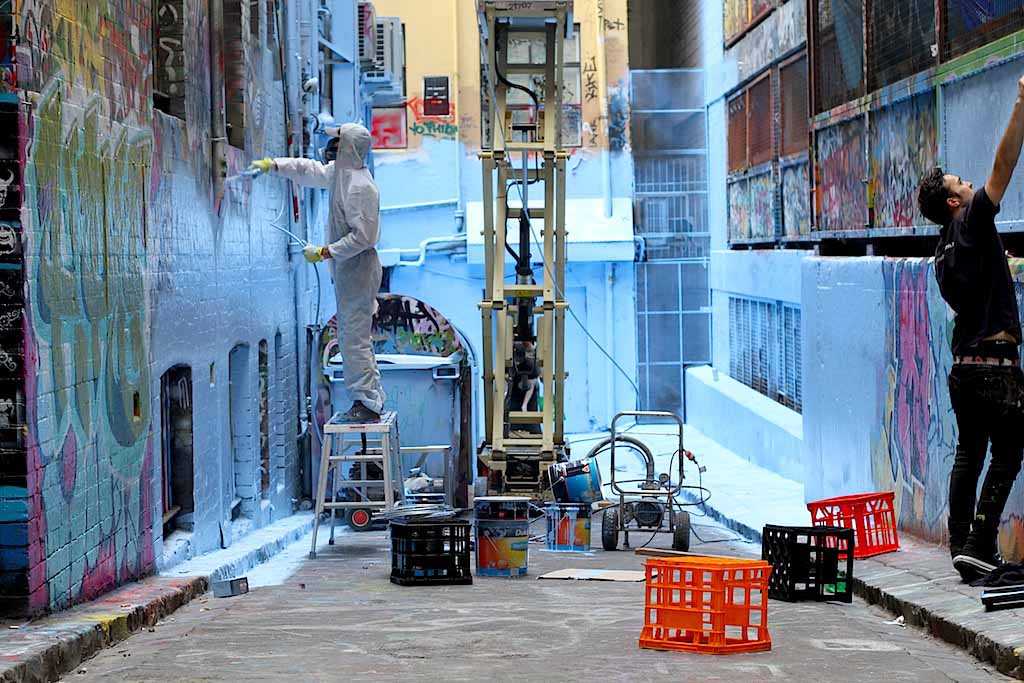 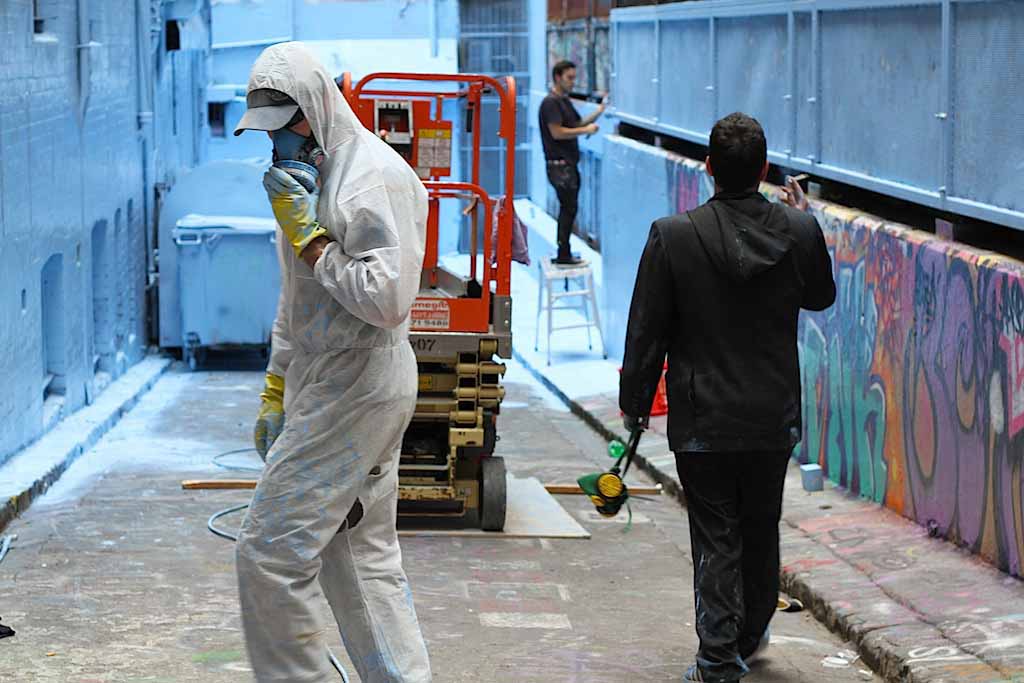 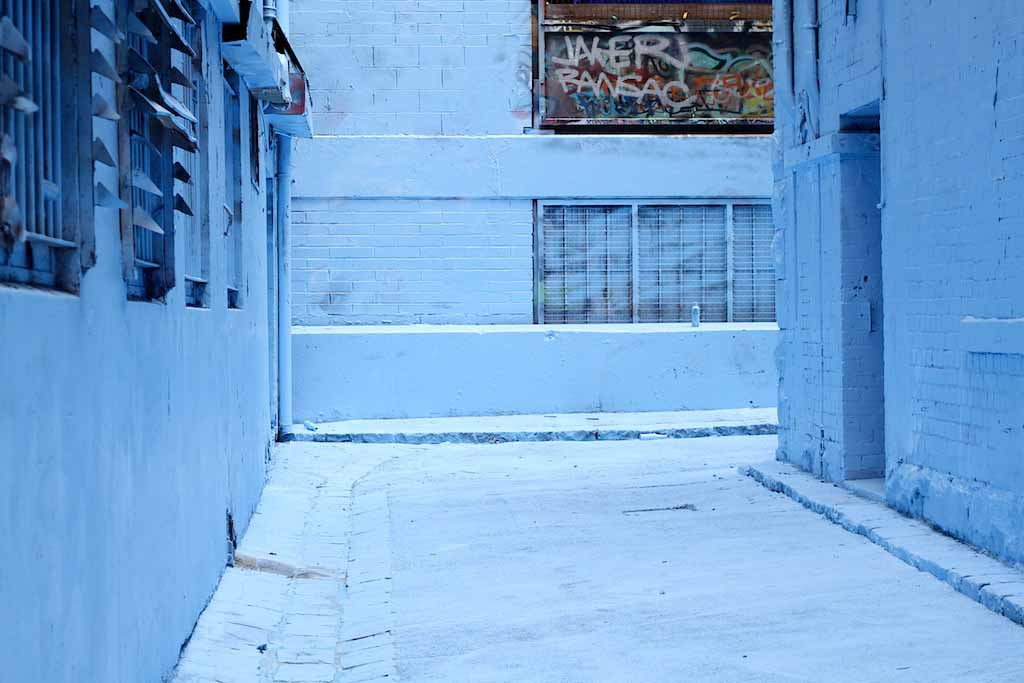 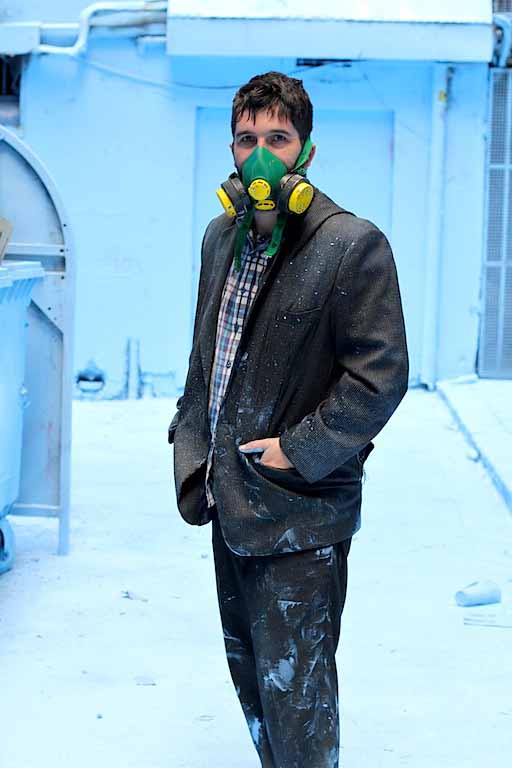 “If he’s supposed to be supporting street art, why did he do it” you ask? According to Doyle’s Facebook page, it was all in the name of art. Doyle called the project “Empty Nursery Blue Laneway”, and you can see a small essay he prepared about the project at the bottom of this blog.

In response to a number of anonymous online comments condemning Doyle’s actions, Doyle encouraged artists to head down to Rutledge Lane and start painting on the new blank (blue) canvas.  And it didn’t take long either, with pieces being thrown up before the blue paint even had time to dry… 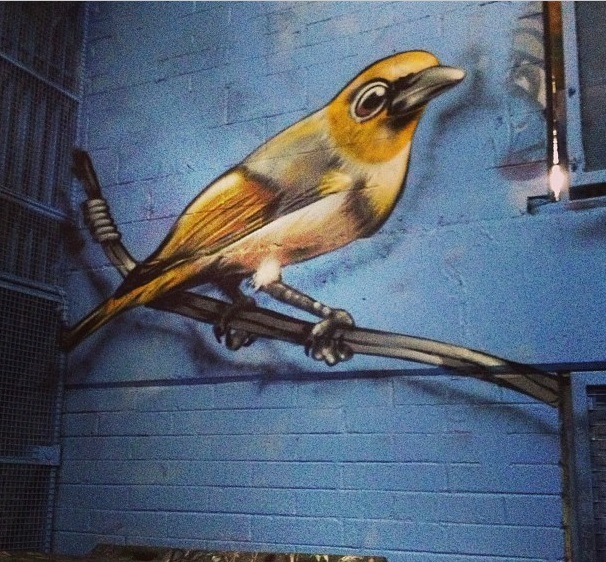 Above artwork by Snowy. Image by @hanstent 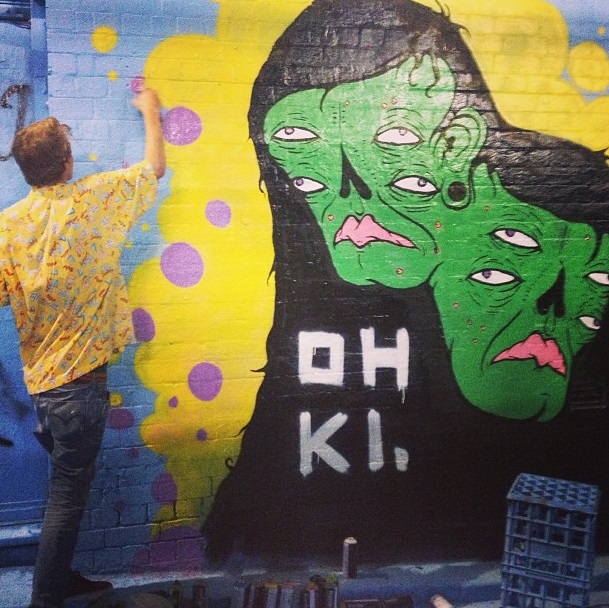 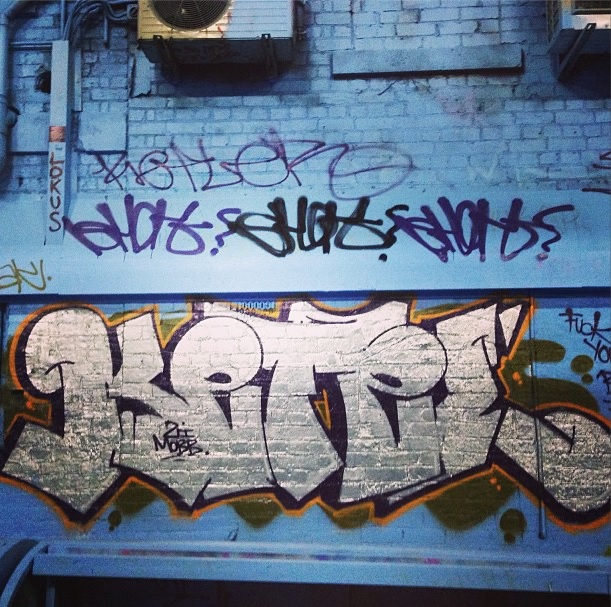 Above image taken by @trashort

What do you think? Was Doyle’s project an act of selfishness or is it simply part of the street art culture – here today, gone tomorrow?

And if you’d like a piece of street art to hang on your own wall, check out the street art currently for sale on artFido HERE!

Today piece was not a buff….. it was a burner.. Hell yeaH…

Houses are a major influence on my aesthetics and imagery. Most of the important events in my early life were focused around our quarter acre block in the heart of suburbia. We had an outback toilet, complete with its own dunny man that came every week to change the bucket. We went through numerous above ground pools and sadly, many pets. My house was not really different than any other suburban house. Yet it was my world for many years, a curated world, in which I learnt social skills and perceived normality from my parents.

I watched from a very young age as my parents struggled with house payments and debt collectors. They worked so hard to pay the bills and bring up 5 kids. They worked in jobs they hated with little respect from their bosses. They married in their teens, and did all the expected norms and learnt behaviour passed down from their parents. The house was a symbol of their hard work.

This experience made me reflect on my childhood home, and the hold it had over me, my family and my art. When my parents eventually lost the house to the bank, my parents moved four hours away to a small cottage in East Gippsland. But the grief and pain followed them. I began to play with the idea of creating a colour that represents my childhood and my suburban experiences. Was it possible to create a colour that could capture that kind of experience?

So I decided to come up with my own colour. I named it: Empty-Nursery Blue

The way I decided to create Empty-Nursery Blue was by sitting in the studio and creating hundreds of different blues until I found the one that expressed my experiences the most. It was a baby blue that had hints of mauve in it. It’s a beautiful colour, a bright pastel. This colour expresses the feeling that something has been disturbed. All is not quite right. I took my disturbing yet beautiful colour to a paint lab and worked out its recipe.

But what good was Empty-Nursery Blue, if it was without a context. I needed to find something to paint to physicalise the concept of the colour.

As mentioned above, after losing their house, my parents moved to an island in the Gippsland Lakes. It’s a significant removal from the realities of suburban Frankston. Their house is alone in the landscape, only bushes and trees to keep it company. Not even a bridge links the island to the nearest shop. This physical removal from the past does not automatically come with emotional removal.

This is why I decided to paint my parents’ new house Empty-Nursery Blue.

Empty-Nursery Blue once placed in context became a symbol of a collective past. Surrounding the new house with the memory and emotions of an experience that ruptured my family’s suburban dream.

In recent years I have spent much of my time lost deep in the Melbourne Street Art world. Street art has become a major part of my life and the lane-ways have become my world. I have lived and breathed art all my life. My art, however, is conceived of and formed from my past experiences. I cannot exist today without recognizing my roots in the past.

Thus, I would like to incorporate my past and my present in a Street Art piece using the colour Empty-Nursery Blue, and only this colour. By using Empty-Nursery Blue to cover Hosier Lane, I am symbolically ‘coating’ my present with my past, it is reminder to me and anyone who is living, that you are a product of your former experiences, and you should be reminded of them as you work your way through your present and into your future. By doing this, I am claiming that a colour in its pure form can be street art or graffiti. This is a great conceptual link from fine art to street art, a link that is often lacking in the Melbourne Street Art scene. By bridging this gap, I hope to expose more people not only to Street Art, but also to the importance of art in general.